Edinburgh Woollen Mill is welcomed to the town 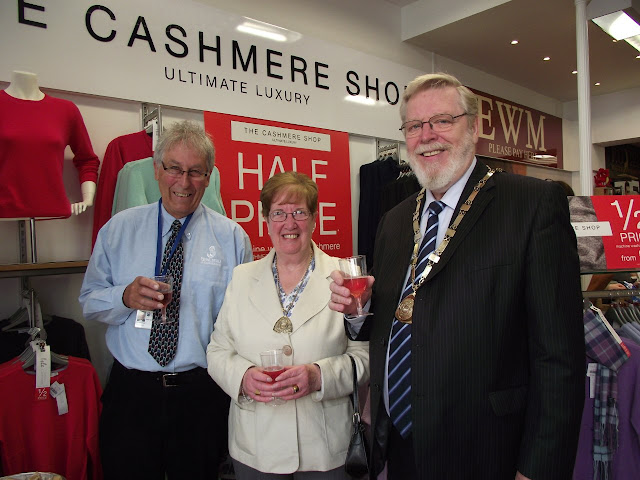 * At the store opening are, from left, County Cllr Stuart Davies with the Mayor and Mayoress.
Denbighshire County Councillor Stuart Davies has welcomed the opening of the Edinburgh Woollen Mill Shop in Llangollen earlier today (Wednesday).
He was invited, along with the Town Mayor, Cllr Bob Lube and the Mayoress Mrs Lube, to the grand opening.
Cllr Davies said he was impressed with the professionalism of the company and swift preparation of the shop.
He added: “It is nice to see that we are bucking the trend and am also pleased to see that people from the local area are employed here. It bodes well for the future.
“It goes to show that national companies are not fazed by the competition from supermarkets and even in these dire times are not afraid to open a new store, knowing full well that a supermarket will also be opening shortly.”
Cllr Davies said he will be assisting the management and has invited them to join in the local community groups supported by the council.
Posted by llanblogger at 3:48 PM