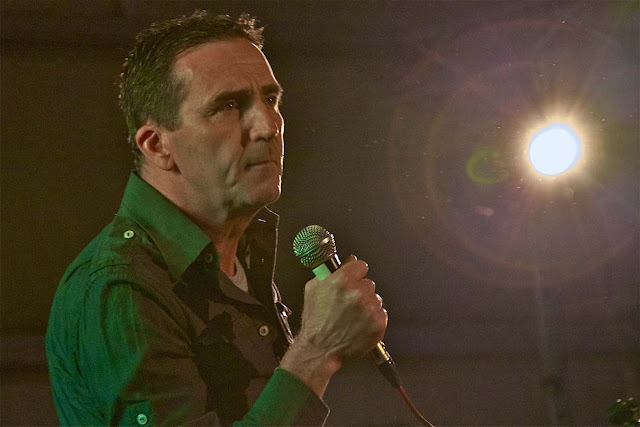 * Bryn Fon will appear during eisteddfod week.
Wild man of Welsh rock Bryn Fon will bring his electrifying stage show to Llangollen for International Eisteddfod week.
The grizzled rocker will explode onto the stage at Llangollen Town Hall on the Saturday night of Eisteddfod week.
He will be backed by his regular band as he aims to show the next generation of Welsh rock and pop bands that there’s plenty of life in the old dog yet.
Bryn, who started out in music in the 1970s, is still rocking all over Wales but this man of many talents also acts and farms too, on his smallholding near Llanllyfni, in Gwynedd.
He’s fresh from a tour of North Wales with the show ‘Gwyn’ - ‘White’ – a two-hander which played to 4,000 children at several venues from Colwyn Bay to Anglesey while his other acting credits include the hit S4C series C’mon Midffild.
It’s as a singer that the 58-year-old is best known though and which gives him his biggest buzz: “We still play two or three gigs a month,” he said: “The band has been together for about 15 years now.
“We played a recent show and didn’t go on until nearly midnight which is a bit late for me these days but I’m not ready for the cocoa and slippers just yet.
“We just want to get things happening and the phone keeps ringing and we keep saying yes.
“Some of the young bands get a bit jealous but there’s a lot of fresh young talent around and some really good up and coming bands on the Welsh music scene.”
Bryn knows the feeling after joining his first band back in 1976: “It was at the National Eisteddfod and I jumped up on stage at an open mic event and sang with some lads who had been in a band in Llanrwst.
“One of them, Ithel Jones, the bass player, sent me a postcard and asked if I wanted to be their singer and together we formed Crysbas.”
Bryn also got into acting and was even ‘Hunk of the Month’ in She magazine in the 1980s though his music career has been uneven but enduring with Sobin a'r Smaeliaid formed after he and friends were asked to be the support band to another Welsh rock stalwart, Geraint Lovegreen, in 1988.
Bryn cites his biggest musical inspirations to American singer-songwriters Leonard Cohen and Neil Young and also attributes some of his stage presence to the king himself, Elvis.
He even has his own record label these days, laBelaBel, and his first album released on it, Abacus, sold 5,000 copies in its first week: “If it had been in the high street stores like HMV rather than in little Welsh bookshops I’m told it would have made the charts,” he said.
Bryn and wife Anna – they have two children - live on their smallholding near Llanllyfni where they keep sheep and Bryn admits that has been tougher and with more late nights even than being a rock singer.
He said: “This last winter I lambed myself and I was up every hour of the day and night. The weather was so bad it was really hard work.
“I don’t like to claim any grants because I would be taking money from real farmers but it was a desperate winter and it cost me a lot in food for the sheep.”
Bryn will be hitting the stage at Llangollen Town Hall as part of the Llangollen After Dark collaboration between the Eisteddfod and the Llangollen Fringe Festival and he said: “We do have some new songs we’re working on although I don’t know if they’ll be ready for Llangollen but we are really looking forward to it.
“We haven’t played in that area for a long time and to be associated with the International Eisteddfod is a big thrill.
“I’ve been in the past and I’ve been looking at the promotional material and what hits you is the colour and spectacle of it. It’s a fantastic event.”
Eisteddfod Musical Director Eilir Owen Griffiths said: “Anyone who has grown up in Wales in the last 40 years and been interested in music will have heard of Bryn Fon – he’s one of the seminal figures of Welsh rock.
“He’s got a real stage presence and a tight band and we’re delighted to have him playing at the Town Hall on Eisteddfod weekend – his set will be well worth catching.
“It will really set the scene for a fantastic Sunday as well when Llanfest brings a host of local bands onto the Eisteddfod field and it provides a real musical link between the Eisteddfod and the town.”
Bryn’s band is Graham Land on drums, John Williams, keyboards, Rhys Parry, guitars, and Neil “Maffia” Williams, bass.
They will be supported by Africa Entsha, a slick a cappella quintet from Soweto who blend pop and male vocal harmonies with physical humour and South African song-and-dance numbers.
Llangollen After Dark, with the Bryn Fon Band and Africa Entsha, is at the Town Hall, Llangollen, on Saturday, July 13, doors open at 7.30pm and tickets, priced at £12.50, are available from the Eisteddfod website www.international-eisteddfod.co.uk
The 67th Llangollen International Musical Eisteddfod takes place this year from Tuesday, July 9, to Sunday, July 14, at the Royal International Pavilion site and boasts a star-studded lineup of concerts and competitions.
Strictly Come Dancing stars James and Ola Jordan are part of a stunning lineup at this year’s Llangollen International Musical Eisteddfod in July.
The glamorous couple will perform with Cuban maestros Buena Vista Social Club and other top attractions are Jools Holland, harpist Claire Jones, tenor Noah Stewart, percussionist Evelyn Glennie and a 200th anniversary performance of Verdi’s Requiem.
The Eisteddfod runs from Tuesday, July 9, to Sunday, July 14, at the Royal International Pavilion site and as well as star-studded concerts there are top class music and dance competitions.
For more information go to www.international-eisteddfod.co.uk or www.facebook.com/llangollen
Posted by llanblogger at 11:59 AM