Bubble Car to run at Llangollen Railway this weekend 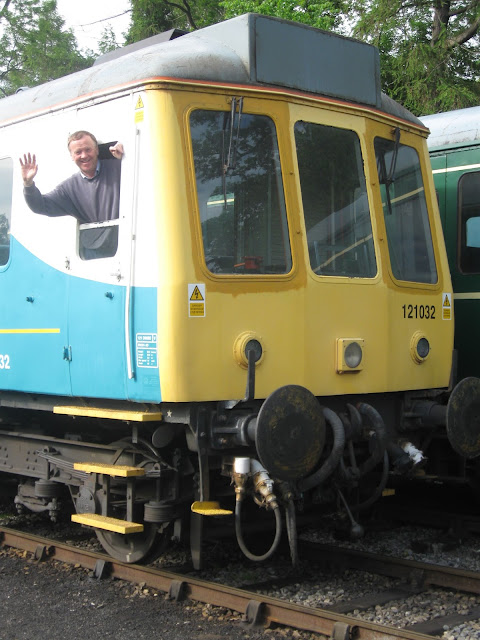 * Evan Green-Hughes in the driver’s cab
of the Bubble Car after it was delivered
to Llangollen Railway on Monday, June 17.

A single unit diesel railcar has been delivered to the Llangollen Railway for a final public appearance at its Railcar Gala weekend due to be held on June 22-23 June.


The visitor is a class 121 railcar, popularly known as a ‘Bubble Car’, which was built in 1961 by the Pressed Steel Company for use on suburban lines.
It has a driving position at each end of the coach and seats 65 passengers.
Until recently it was used by Arriva Trains Wales on the short shuttle service run between Cardiff Queen Street and Cardiff Bay.


For this final appearance in service at the Llangollen gala event the railcar has been loaned by Chiltern Railways after it was withdrawn from service and delivered to the depot at Tyseley, Birmingham.


It will be joined at the gala by a similar single car unit, the class 122, as built by the Gloucester Carriage & Wagon Works in 1958, and now preserved on the Battlefield line in Leicestershire.


Evan Green-Hughes, chairman of Llangollen Railcars Group, said: “Having two Bubble Cars together on the Llangollen line will be a unique occasion and they will make an interesting contrast alongside our home based fleet of two car units.
"We are very grateful to Chiltern Railways for releasing the class 121 unit to us for this final appearance.
"The opportunity to be able to operate two of the type at our gala event has attracted a lot of interest from rail fans and we expect a big attendance from those wishing the sample the 121 for a final time.”


George Jones for Llangollen Railway added: “The visit of the single unit railcar is of interest in the 50th anniversary of the infamous Beeching Report which led to the closure of the line from Ruabon to Barmouth.
"When objections were made to the closure plan in 1964, one idea promoted was the use of the railcar to maintain the service at reduced cost.
"However, British Rail management at the time declared that the revenue earning potential of a single unit railcar would be insufficient to cover the maintenance costs of the 52 mile line and the idea was not adopted.
"Ruabon to Barmouth remained a steam train operation to the end in January 1965 and no attempt was made to rationalise the railway or to introduce diesel trains.


“This weekend visitors will have the opportunity to see how the line might have operated post Dr Beeching if it has been reprieved from closure.
"With a near half hourly service on the 7.5 mile route between Llangollen and Carrog, the railcars will provide the opportunity to sit behind the driver and see the way ahead, something travellers can not do on the national network."


"Certain trains during the gala event will run on to the Railway’s line extension towards Corwen, which means visitors can see what has been achieved so far at the railhead at Bonwm and learn about the plan to reach Corwen East in 2013."
He added: “Sadly, the gala will also see the last working of the popular Great Western Auto train as the steam locomotive, Pannier Tank No.6430, is due to be withdrawn from service for its ten year overhaul.
"Since it was rebuilt from a kit of parts at Llangollen and returned to service in 2003, the engine has operated with two restored Great Western auto-coaches and provided an opportunity to sample a real branch line train of the 1940s.
"No.6430 has been much travelled during its ten year career visiting many other heritage lines in Britain and becoming a splendid representative for the Llangollen Railway. It is hoped the overhaul can be fast tracked to ensure an early return of this popular engine.”


Details of the special timetable for the weekend can be viewed on the Llangollen Railway’s website at: Llangollen-Railway.co.uk
Posted by llanblogger at 7:30 AM