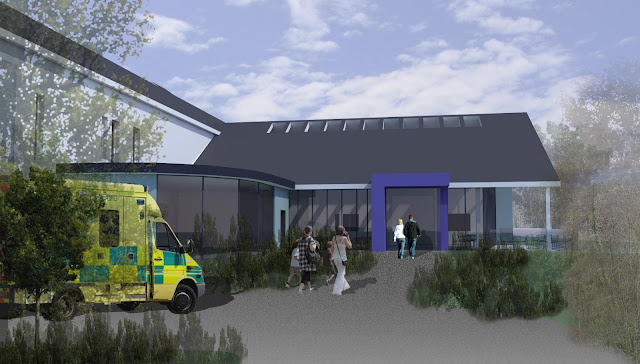 * An artist's impression of the proposed new health centre.
Plans for a new £5.5m health centre in Llangollen are fatally flawed because they don’t include inpatient beds, campaigners say.
Keep Llangollen Health Services spokesman Mabon ap Gwynfor said the proposals promised a great deal but did not deliver on key elements for people living in the Vale of Llangollen.
He said: “Throughout the consultation period last year we called for beds to be retained in Llangollen and warned that there would be a downgrading of services if the health board’s plans went through.
"We also warned that Llangollen would be left without any services if the hospital was closed before home care and the health centre had been approved.
“It’s been nearly five months since they closed the hospital. Before closing they promised all sorts of things including a Home Enhanced Care Scheme and beds at local care homes, none of which have materialised. It’s not surprising that local people are sceptical about other promises being made by the health board.
“We want to see an improved local health service and that’s why we welcome, in principle, a health centre. But it needs to be safe and sustainable. The site under consideration is difficult to access for pedestrians from the town centre, especially for people with pushchairs, the elderly and disabled – precisely the people who need to use a health centre. It also lacks the one key element, which is hospital beds, which as we know is needed for this area."
He also expressed concern that the health board was rushing through the plans without the necessary checks and balances needed for such a large project.
Mabon ap Gwynfor said: “It’s important that the Health Board follows the standard procedures instead of trying to cut corners.”
He also called for local representatives of patients to be represented on the stakeholder group during the development stages, adding: “Keep Llangollen Health Services were promised on numerous occasions that we would be invited but never were.
"The Health Board says that patients are represented by the Community Health Council, yet the CHC’s representative comes from Ruthin and not Llangollen or the Dee Valley. This shows complete contempt for the people of this area.”

* The full consultation document can be viewed via the Keep Llangollen Special website at http://en.keepllangollenspecial.org.uk/wp-content/uploads/2013/06/Llangollen-Health-Centre-Public-Consultation.pdf
Posted by llanblogger at 7:38 AM