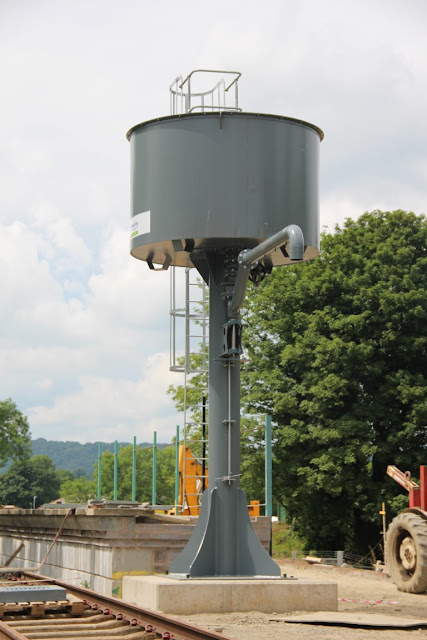 The latest stage in the Corwen Central Railway Development Project has seen a major item of railway infrastructure installed at the station site in the form of a traditional style of parachute water tank, as used in the steam era.

Brought round by road from the premises of Barnett Engineering Ltd in Rhosllanerchrugog, the tower was installed on June 12.

The cylindrical water tank (pictured) sits on top of a column and is designed to hold 2,000 gallons of water for rapid delivery to replenish the tanks of a steam locomotive.

Standing seven metres high, the completed facility weighs in at five tonnes. It incorporates a modern gate value delivery system and will draw water from a borehole sited next to the railway at Corwen.

The structure has been built to modern standards using fabrication and welding methods to meet current regulatory requirements, yet retains the appearance of an item of heritage equipment.

A Llangollen Railway spokesman said: “This latest addition to the railway facilities is now a major feature on the Corwen site and a further statement of our intent to complete the terminus station.

"During a slick two-hour operation, the complete assembly of water tank and its supporting column was off-loaded, pulled erect and lifted on to the base of a previously prepared foundation plinth.

"With the access stairs and swivel water delivery arm attached, this new item of infrastructure stands at the eastern end of platform 2 and will service locomotives standing on either of the loop lines. A trial filling of water must await the construction of a sump and drain away, once the borehole water supply is connected.

“Installation of this new item of heritage railway equipment has only been possible through the generous donations from members and supporters who have raised £17,000 in funding as a major contribution to the project to provide a water supply for locomotives at the new terminus.

"Work to complete the station and its facilities continues with the next stage concentrating on building the platform 1 wall during the summer. An opening of the Corwen station in 2019 remains dependent on the acquisition of resources in terms of materials, manpower and finance and continued support is necessary if we are to achieve that aim.”

Speaking for Barnett Engineering Ltd, Managing Director Steve Barnett said: “When we were asked to construct this steam-age item of equipment we thought it a little unusual, but the job was accepted as a challenge. However, it proved well within our capacity to design and manufacture and we are pleased to see the completed job delivered to Corwen where it will be installed at the new station site.”