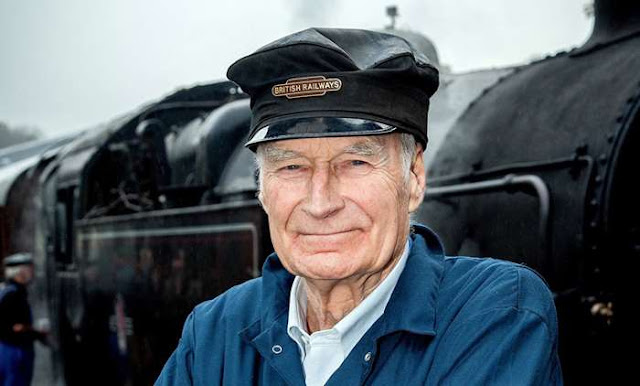 * Peter Snow presents the programme from Llangollen Railway to be screened this Wednesday.

LLANGOLLEN Railway is to star in a new Channel 4 TV series.


The world famous heritage line will feature in this Wednesday evening’s edition of the programme Great Railway Restorations presented by television personality Peter Snow.
He visited Llangollen to highlight the restoration of a vintage railway carriage at the railway's Pentrefelin Carriage and Wagon Works.
The teak-bodied carriage, built in 1912 by the Great Northern Railway, was used on East Coast Mainline express services for over 40 years before being relegated to departmental duties by British Rail in 1977.
The programme follows the restoration project through all the stages of a major refurbishment by members of the Llangollen Railway workforce led by chairman Peter Lund.
In the course of the programme, a number of challenges have to be overcome to turn a near wreck into a coach which now features an open saloon and three second-class compartments in the livery of the former London North Eastern Railway.
Llangollen Railway’s business manager Liz McGuinness said: "The programme will make fascinating viewing for rail fans as the spotlight is placed on the Llangollen Railway and part one will be screened on Wednesday at 8pm.”
Railway chairman Peter Lund said: “The announcement by Channel 4 of the broadcast of Great Railway Restorations is the culmination of the enormous efforts devoted to this project by the employees and volunteers of the Carriage & Wagon Department of Llangollen Railway.
“The six months allotted to the completion of this project meant that there were many late nights involved to get the job finished. It is such a shame that current safety regulations deprive the public of an opportunity to ride in this historic carriage.”
In the series life-long train enthusiast Peter Snow will celebrate the great history of Britain and its railways, through the restoration of four of the most iconic railway carriages ever built.


Each carriage highlighted comes from a different era of train travel, and each will be restored to its former glory with complete historical accuracy.


Peter is joined by Henry Cole, who will explore the passenger experience of the era with historical items from the past to fully appreciate the provenance of each railway carriage.


Each of the episodes will see a carriage restored by a team of world-class railway restoration specialists. Starting in each case with a derelict and neglected shell, the programmes will follow the journey to bring these historical treasures back to life, in an intricate make-over of four forgotten pieces of our national heritage. The carriages cover 100 years of railway history starting in 1860, and include a Royal Saloon used by Queen Victoria.


At the end of each episode, the full glory of the carriage make-over will be revealed. The carriage will then be put back on the rails, pulled by a locomotive from the era. In the final episode, all four carriages will be brought together creating an entirely bespoke ‘train through time’ pulled by a steam locomotive – driven by Peter Snow himself, fulfilling a boyhood dream to drive a steam engine.
Posted by llanblogger at 6:55 AM