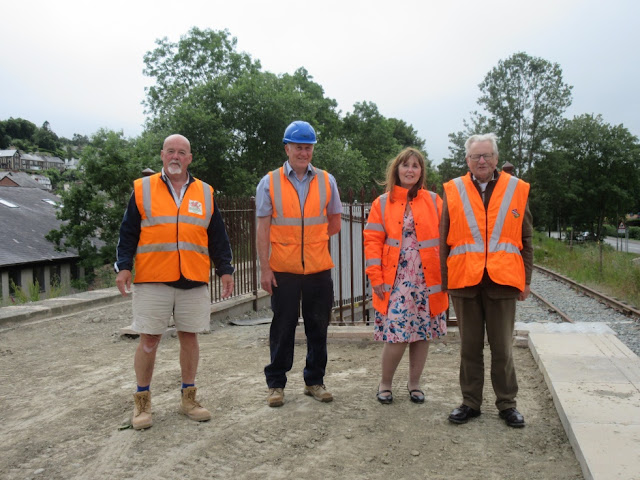 
During an escorted visit he was shown the major civil engineering work which is creating a new terminus station for the Dee Valley’s heritage railway.
Apart from the continuing work on a new island platform, the Minister was able to see the newly installed water tank which has been built locally to modern standards and connects for supply with an environmentally friendly borehole.
In a briefing which followed the Minister was told about the effort still needed to complete the station in time for an opening in 2019, when the new rail facility will be connected to the existing rail head and trains can end close to town centre.
Project manager Richard Dixon-Gough said: “We were delighted with the opportunity to welcome the Minister and show him the substantial progress that has been made with the building of the new platform which has received 80% grant aid funding from the European Rural Development Fund for Wales.”


Lord Elis Thomas said: "I am very impressed with what has been achieved by the volunteer-led project team in creating the new railway station for Corwen.
"The completion of this project will add a new dimension to tourist facilities in North East Wales and will secure the future of the Llangollen Railway as a major attraction in the beautiful Dee Valley."
Posted by llanblogger at 6:43 AM