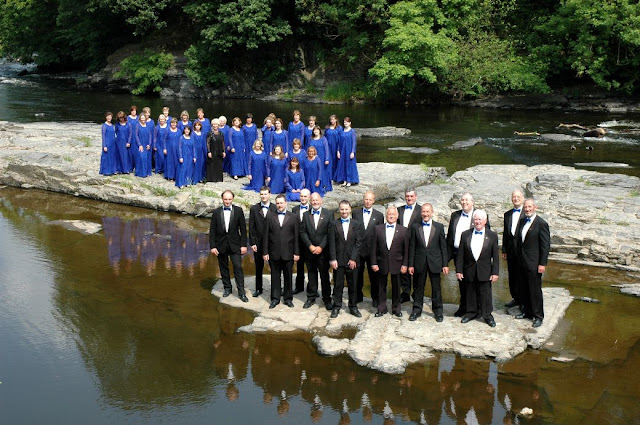 * The Sirenian Singers will make an emotional return to this year's Eisteddfod.

One of the most successful choirs to have graced the stage at an international festival is making an emotional return as it marks the 20th anniversary of their greatest ever triumph.

The Sirenian Singers, which is also celebrating its 40th anniversary this year, will be closing the concert at this year’s Llangollen International Musical Eisteddfod when the new Pendine International Voice of the Future will be crowned.

The 50-strong choir, under the baton of founder and musical director Jean Stanley Jones MBE, has members from Wrexham, Flintshire, Denbighshire, Cheshire and Shropshire and is a multiple winner at Llangollen and became the first Welsh choir to win the coveted Choir of the World title in 1998.

As well as looking forward to performing once again on the iconic Eisteddfod stage, Jean says they can’t wait to listen to the three finalists competing on Wednesday, July 4.


This year’s contest has attracted a record number of 43 entries and for the second year running arts-loving care organisation Pendine Park, a long-standing supporter of the festival, are contributing £5,000 to the prize fund via the Pendine Arts and Community Trust which was established to support cultural and community initiatives.

The rest of the £10,000 prize pot is being donated by the Sir Bryn Terfel Foundation and Llangollen Eisteddfod.
The aim of the competition is to showcase and nurture young talent by raising their profile and giving their budding careers a financial boost.
Winners are also given the opportunity to perform in future Eisteddfod concerts with established international stars.
Jean said: “Llangollen is always something very special and this year we will close the concert by performing songs from our own extensive repertoire. However, as we are closing the concert, it means we will have the chance to enjoy the Pendine Voice of the Future final.
“It’s an important competition and the wonderful prize fund will give a huge boost to the careers of the three finalists. I am excited to have the chance to witness the competition and I know many of our singers are looking forward to it as well.

“This year the choir is celebrating our 40th birthday and we do have some members who have been with me since day one. The choir started as I was the music teacher at St David’s School in Wrexham, which is now Ysgol Rhosnesni, and set up a girls’ choir.

“We competed at Llangollen and won the Children’s choir competition as well as several other major competitions including Montreux, Switzerland.  Some of the girls, on leaving school, wanted to continue singing and asked that I form an adult choir.

“I set up a ladies choir and returned to Llangollen where we won the female choir competition several times and we also won the famous Bela Bartok Festival competition in Hungary.

“I was delighted when we won that coveted title, which was held the same time as Llangollen that year. The fact we had won was announced on the main stage Eisteddfod stage. It was a bit special to hear that.”

Jean, who has recently retired from her role of Flintshire’s education musical director and advisor to Denbighshire, Conwy and Wrexham councils, added: “When we came back from Hungary I decided it was time to add some male voices to the choir as that would give us a much broader repertoire. So that’s what we did.

“We returned to Llangollen to win the mixed choral title several times and, in 1998, we became the first Welsh choir to take the Choir of the World trophy which is an achievement I am immensely proud of.

“The choir is made up of around 30 women and 20 male voices with everyone living within a 50 mile radius of Wrexham. Time seems to go so quickly and it’s hard to believe we are celebrating our 40th year.

“We have been back to Llangollen several times in recent years performing alongside the Llangollen Eisteddfod choir with top stars such as Lesley Garrett and composer Karl Jenkins. However, this time we are going to be singing songs from our won repertoire which is always nice.

“Being part of a wonderful Llangollen concert evening and the Pendine International Voice of the Future competition is really exciting and as a choir we are all really looking forward to what will be a wonderful night.”

Pendine Park proprietor Mario Kreft MBE and his wife Gill are really excited about the competition after witnessing a breath-taking vocal battle at last year’s Eisteddfod.


He said: “We established the Pendine Arts and Community Trust to enhance our ongoing support to more than 20 arts organisations and a host of good causes in the community.

“We’re proud to be working with the Sir Bryn Terfel Foundation to support such an exceptional competition which provides a catalyst for talented young individuals to reach new heights by launching their singing careers on a global stage.
“Music and the arts provide the golden thread that runs through everything we do at Pendine Park to enrich the lives of our residents and staff alike, so we’re delighted to be helping out by creating opportunities for gifted young singers by providing an international platform for their talent.”
“I have no doubt the adjudicators are going to have a very difficult task on their hands in deciding who will lift this year’s crown.”

The Classical Collection concert will also feature the Eisteddfod’s new musical director Vicky Yannoula who will perform alongside fellow pianist Peter Jablonski in what is described as a dynamic and moving musical collaboration.

* For more tickets to the Classical Collection concert including the Pendine International Voice of the Future competition please visit www.international-eisteddfod.co.uk