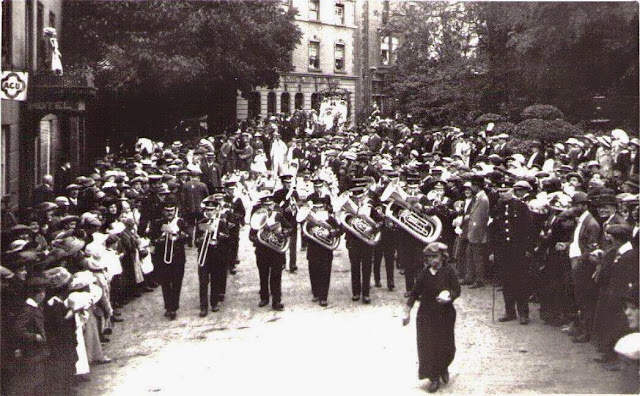 * The Silver Band in its early days, probably before World Ware One, passing by what is now Centenary Square at the end of Bridge Street.
Look closely to see a fountain amongst the trees. 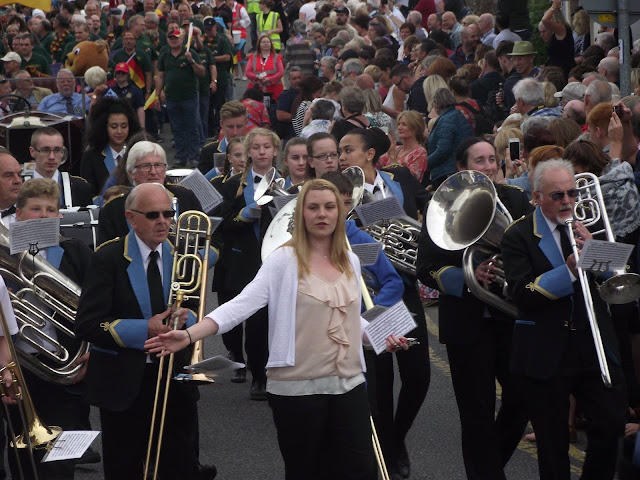 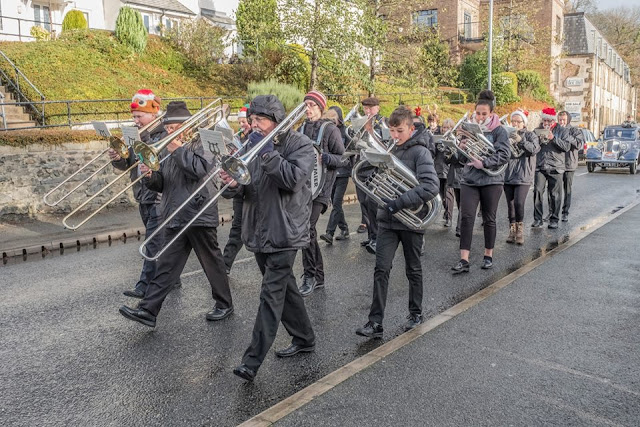 * ... and braving the weather in last year's Christmas parade.
Special llanblogger report
Llangollen Silver Band, which has played on without a break since 1904, is now on the lookout for new blood to help keep it in tune for at least another century.
Its chairman Bob Lube, who himself joined the band’s ranks as a drummer 41 years ago, says the search is currently on for a new conductor for its successful senior section along with likely players of any age from eight years onwards.


“We were formed 114 years ago and are very proud of the fact that we’ve been playing continuously ever since, even during wartime,” he said.
“We play regular dates throughout the year, which includes about 15 concerts and lots of fetes and special events such as leading the Remembrance Day, Christmas and International Eisteddfod parades in Llangollen.


“We perform mostly in north Wales but we’ve also appeared in the neighbouring areas of England such as Cheshire and Shropshire.”
Now, Bob added, the band is looking for a likely candidate to take over the important role of conductor to the senior band.


He explained: “We have three sections – the senior band, which currently comprises about 20 accomplished players, the youth band of about 15-16 members and the training band with around the same number.
“The senior band is obviously one which plays all the important dates and it’s their conductor we’re after.


“The role was admirably filled for a number of years by Trevor Williams and more recently we’ve had the very promising young conductor Mia Thomas. But now she’s moved on and we’re in need of a replacement.
“The person we appoint could be any age but obviously must have experience of conducting. They should also be capable of fitting in with the band and helping to bring on our young players, which is very important to us.


“The person could also be local but we’re prepared to pay reasonable expenses for anyone who has to travel a bit.”
Bob said the silver band is also hoping to recruit new players to boost its ranks.


“As with most things, we have young people joining us as children and then when they grow up they often move away to go to university and things like that. So it would be good to recruit a few more potential players aged eight and over to fill the gaps this creates.
“But it’s not just youngsters, we’re also after more mature players. These might be people who have played an instrument when they were younger, given it up but now want to get back into it. At the moment, we’re particularly looking for a drummer.


“Our motto is music at the heart of the community, which was personified by one of our most stalwart members, Albert Hammonds who died in 2012. We have a proud record of playing since 1904 and want to keep going for another century.”
Regular practice sessions for the seniors are held on Mondays from 7-9pm in the Band Room in Parade Street, which underwent a £100,000 refurbishment in 2012 thanks to grants and the band’s own fundraising. The training and youth bands meet up every Friday in the same place from 6-8.30pm.


* More details about vacancies can be found on the band’s website at: http://www.llangollensilverband.org.uk/
Posted by llanblogger at 6:58 AM