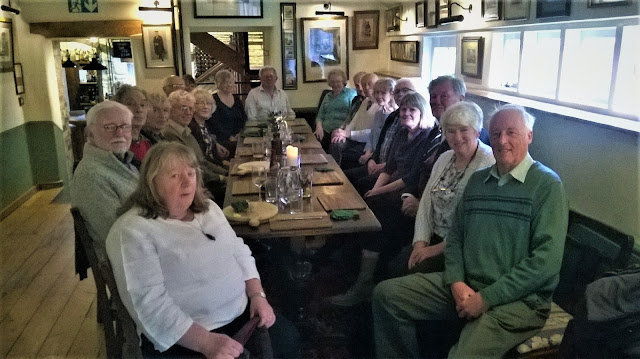 * Members of Llangollen Tidy Town Team at their annual lunch in the Corn Mill.

Members of the Llangollen Tidy Town team met for their annual lunch at the Corn Mill yesterday (Sunday).

In his latest annual report the voluntary group's co-ordinator David Davies said: "The 18-strong team has continued to meet at least once a month come rain or shine during this our twelfth year of operation.

"2017 has seen the continuation of some annual events together with some new challenges.

"Ongoing has been our litter clears, with a total this year of 25 full sacks collected,  around the Wharf and canal side, especially pre-Eisteddfod week,  along the A5, around Dinas Bran School and on the Castle Hill.  Finds on Castle hill included garden seating and a porta loo!

"We have continued our third year tree clearing and opening up of Cemetery Woods, including felling a large tree dangerously overhanging Llangollen Railway's offside station platform. The bonfires at this location demonstrate the team's pyromania abilities.

"Various seats around the town have been repaired during the year and, after much negotiation and with the support of the Canal & Rivers Trust, we provided and installed a new seat on the canal side opposite the Llangollen Basin.

"This arose as a result of an idea from senior residents of Cwrt Glan Y Gamlas who have limited walking ability. The seat in such a position was just right for a short stroll turnaround point and has since been much appreciated by them and many visitors.

"At Plas Newydd we completed the project of clearance of laurel growth from the steep sided bank of the Cyflymen.

"Enjoying wading in water, we also this year cleared the water channel of the stream flowing down Dinas Bran hill past the school.  This had been lost under overgrowth for a few years.

"We assisted at the Town Christmas Festival in our usual capacities of stall erection/dismantling and traffic control for the parade and fireworks.

"The Town Hall also received our attention with the kitchen and one dressing room being deep cleaned and then ceilings and walls repainted.

"Together with thanks from the Town Council it was good to receive a letter of thanks from a hall user who noticed the significant difference following our work.

"A big thank you to all our supporters  and  to all members of the team for over 500 hours of voluntary work during the year."
Posted by llanblogger at 6:34 AM