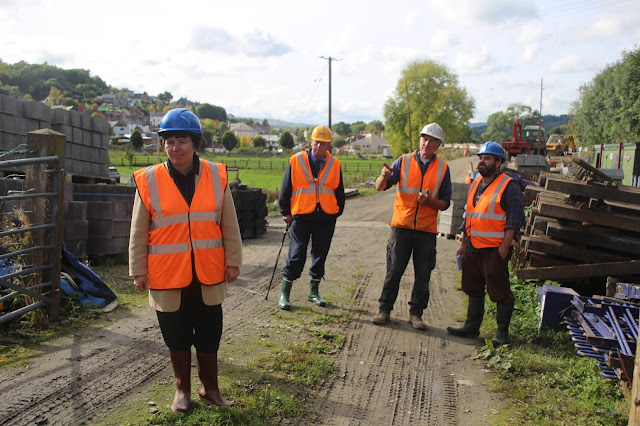 * Clwyd South MP Susan Elan Jones on a visit to the project site at Corwen.


Volunteers working on the Llangollen Railway Trust’s major civil engineering project to build a new terminus at Corwen reckon they are just on half way to completion, with the prospect of trains running by early 2019.

Looking forward to progress in 2018 project leader Richard Dixon-Gough said: “By this time next year, we anticipate being in a position to infill the gap in the embankment which was created to provide Welsh Water with access to the Corwen Water Treatment plant.

"The building of a new access road from Green Lane into the plant allows the earlier route to be recovered.

"Subject to the on-going need for resources, manpower, materials and fiancé, we expect to be able to lay track from the existing rail head to connect up with the station loop line installation.

"Once the new terminal rail layout has been ballasted and tamped, and inspected to be fit for operation, we hope that trains will run into Corwen Central in the early part of 2019, although a date for a public opening cannot be announced at this time.”

As the new year begins the plan is to install the foundations for the water tower at the eastern end of the platform.  This will allow provision of the water supply from the borehole which was drilled in February 2017.

A pump house structure has been fabricated using mostly recycled materials and is now in place to secure the installation.

The building of the wall for platform 1 will follow and will involve excavating footings for 16 loads of concrete and the installation of 200 easi-blocs as the modern means of building a platform before the corbeling, or overhang, is built on top.

When complete  the area for the island platform and will require  some 10,000 tonnes of spoil to infill the base prior to paving the large area.

The installation of drainage and piping for water, sewage and cabling has already taken place, and the accessible ramp for wheelchair access is being built at the western end.

By this time next year it is expected the  infilling the gap in the embankment will commence. This gap was created to provide Welsh Water with access to the Corwen Water Treatment plant.

The building of a new access road from Green Lane into the plant allows the earlier route to be recovered.

Subject to the on-going need for resources, manpower, materials and finance, the team will be laying track from the existing rail head to connect up with the station loop line installation.

Most of the work has been undertaken by the team of volunteers - average age 68 - aided by contractors when specific skills and equipment were required.

Estimated value of the volunteer hours put into the project last year exceeds £200k, without which it would be unaffordable.

Aside from grant aid provided by the Welsh Government’s European development fund for rural Wales, which is paying for 80% of the cost of the platform, the remainder of the cost is being raised through donations and share purchase in Llangollen Railway plc.

Since the railway's Big Push Corwen share appeal was launched last April nearly £100k has been raised but shares to a total of £250k remain available to support the completion of the Corwen project.

Commenting of the prospects for extended operations on the line, railway general manager Liz McGuinness said: “The prospect of trains running into the new station during 2019 means that the current, temporary platform at Dwyrain Corwen East, will remain in use for the 2018 season.

"However, we will call a halt to operations on the extension beyond Carrog as of October 2018 and the temporary platform will be dismantled as part of the engineering work needed to connect to the new station layout.

“The temporary station has served us well since it opened in 2014 but has always been recognised as operationally inconvenient and it lacks the immediacy of access to and from the town centre and car park.

"Terminating trains at a station central to the town, the bus interchange and the car park is key to opening up a new market segment to attract more passengers from North West Wales to Llangollen Railway, with important prospects for the town of Corwen to gain extra visitors."
Posted by llanblogger at 6:32 AM