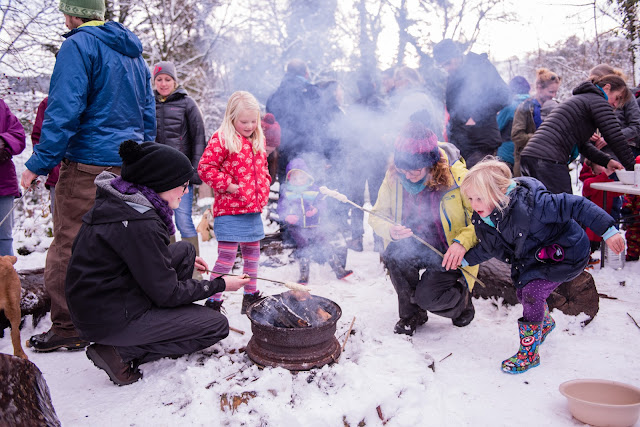 * Volunteers gather in the garden during the recent snow.

Llangollen Town Council could step in the save the area’s community garden from closure.


That’s the latest message from campaigners fighting to prevent the popular facility being lost to the local area by being sold off for housing development.
The garden had been threatened by a deal between a local developer and the landowner, Denbighshire County council.

At the end of last year the council's Asset Management Group decided to gift the 0.5-acre plot for housing on the basis that the developer will carry out works to nearby Plas Newydd.


Founders of the garden, which was established in 2012, say they received just four days’ notice ahead of the decision, which is still due to be ratified.


Only last week the campaign was featured in a report on BBC Wales TV news when North Wales reporter Matthew Richards interviewed a number of garden group members.


Now, people who signed a petition to save the garden have received an email from Warren Davies of the community garden group which says: “Thank you for signing our petition.


The council were due to make a decision today on the developer's proposal.
“However, your support has helped us delay the final decision on the garden to March 8th.

“With the financial support of an anonymous benefactor, Llangollen Town Council has made an offer to Denbighshire County Council to buy the community garden land.

“This is great news. But we are not out of the woods yet, we have to keep the pressure on...

“If you have already written to your councillors then rest assured your input has had a huge impact on decision makers at Denbighshire County Council.”
Posted by llanblogger at 6:32 AM