Denbighshire County Council has announced the appointment of its new Chief Executive.

Judith Greenhalgh (pictured), who was previously the Director of Corporate Resources at Derbyshire County Council, is from Manchester and is also a former Deputy Chief Executive of the Manchester Probation Service.

Leader of Denbighshire, Councillor Hugh Evans OBE, said: “We are delighted to be welcoming someone of such high calibre to Denbighshire. 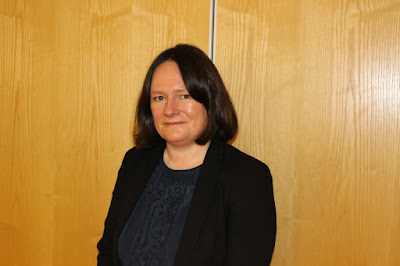 “There were strong contenders in the running for the post and they all performed to an extremely high standard in a rigorous selection process”.

Judith said: “I’m delighted to have been offered the role. I cannot wait to take up the challenge and join Denbighshire. It is such a beautiful county, which is very close to my heart. I have often stayed in the Clwydian Range and I’ll relish the challenge of coming to work for such a progressive authority”.

The new Chief Executive will replace Dr Mohammed Mehmet who is due to leave his post in April.

Councillor Hugh Evans added:  “We would like to take this opportunity to publicly thank Mohammed for 10 years of loyal and committed service to Denbighshire.

“During his tenure, the Council has continued to improve services to residents, has become closer to the community and is now consistently amongst the best performing authorities in Wales.  He is leaving a lasting legacy and we wish him the very best for the future."
Posted by llanblogger at 7:48 AM