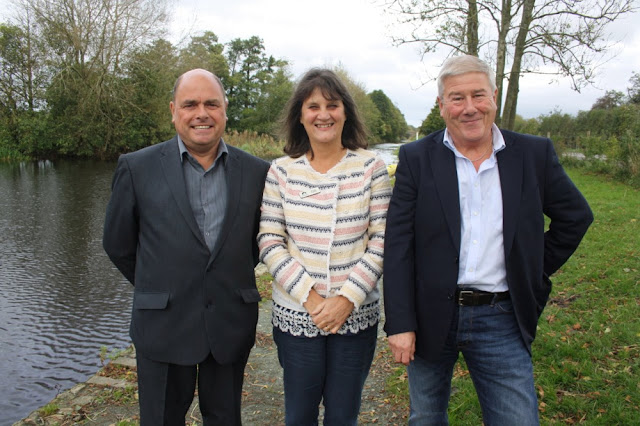 One of the people who helped to run the Llangollen Canal has left the helm for the last time.

Howard Griffiths is one of three key members of staff to retire from the Canal & River Trust’s North Wales & Borders Waterway team who between them have notched up nearly a century of service to the canals.

Aged 59, he has stepped down as customer service supervisor for the Llangollen and Montgomery canals.

Based out of the Ellesmere office, he has lived all his life on the Montgomery Canal, mixing work and pleasure in a career spanning 39 years caring for his local waterways.

His father was also a canalman for 24 years and Howard has spent his entire life living in the same lock keeper’s cottage at Aston Locks, near Oswestry, where he was born, raised, married and brought up four daughters of his own.

Howard said it was the people – friends, colleagues, customers – who have helped to make his job extra special.

“All the teams I have worked with have been top notch. Our job involves the Llangollen Canal, which is one of the busiest waterways in the country, and the Montgomery – one of quietest and most peaceful, well-known for its nature.

“You get to know everyone and when the sun’s shining and everything is going well, it’s hard to beat it.”

His colleague Roger Birch now steps up to become supervisor.

Also retiring is waterway manager Wendy Capelle. Based in the Northwich office, she left after 18 years’ service just before her 60th birthday on Christmas Day.

As a qualified management accountant, she initially joined British Waterways in the finance department, but for the last eight years has been at the helm of North Wales & Borders, leading a team of up to 60 staff looking after canals and navigations in Cheshire, Shropshire and North Wales.

She said: “I have loved working for the Trust. I’ve worked with some great people and I’ve appreciated all the opportunities I’ve been given in different roles.  The charity is doing some great work to improve the nation’s waterways and make them a special place to visit, and I will miss being part of the enthusiastic team making this happen.”

Experienced waterway manager David Baldacchino will take over from Wendy, with interim responsibility for North Wales & Borders from January 1.

Third staff member leaving is Neville Preece, 62), who will retire in early 2018.

Neville is the supervisor for the southern section of the Shropshire Union Canal, based out of Norbury. He first started working on the waterways 41 years ago as part of the dredging fleet on the River Weaver Navigation, which was then still used by commercial cargo vessels.

Over the years he has taken on a number of roles from length foreman and harbour master to a supervisor in Chester.

He recalls: “The waterways were very different when I first started work. Hundreds of coasters travelled along the River Weaver to ICI at Winnington, near Northwich, every year, carrying soda ash, chlorine, cement and raw talc. They then went via Marsh Lock into the Manchester Ship Canal and sailed to Scotland, Ireland and beyond.

“I love talking to people. Every day is different. It is the sort of job that if you like it, you’re here for the rest of your life.”
Posted by llanblogger at 6:33 AM