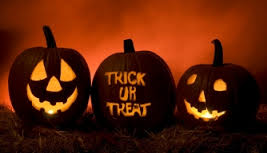 With Halloween 2016 is fast approaching, Trading Standards across Wales are urging parents to be aware of the potential fire risk presented by children’s fancy dress costumes.

In October 2014 television presenter Claudia Winkleman’s eight-year-old daughter was severely burned after her witch costume caught fire, having been in contact allegedly with or in close proximity to a lit candle inside a pumpkin.

Following this incident a co-ordinated survey was conducted by Trading Standards Services throughout the UK to assess the level of compliance of children’s costumes available at that time.

The safety of children’s costumes currently falls under the need to comply with the Toys (Safety) Regulations 2011, which is achieved through meeting the requirements of Part 2 of the Toy Safety Standard EN71.

Compliance with Toy Safety Regulations doesn’t mean that these costumes won’t catch fire as a ‘maximum allowable rate’ at which the flame can spread is defined.  Parents are advised to only purchase costumes that are CE marked and to follow the instructions and safety information carefully.

Fancy dress costumes must be labelled with a ‘CE’ which is a declaration by the manufacturer that they comply with the Toy Safety Regulations.

Emlyn Jones, Denbighshire’s Public Protection Manager said: “We would encourage parents to be vigilant and aware of the potential risks associated with fancy dress costumes and fire or naked flames.

"The simple advice is to keep your children away from candles and naked flames or use an LED equivalent. Children are wearing fancy dress costumes more and more, including wigs and masks, not only during the Halloween period so follow this advice at all times.

"Only buy costumes labelled with a ‘CE’ and report retailers to your Local Trading Standards Service if you encounter costumes that do not bear this important safety mark.”

Councillor David Smith, Denbighshire Council’s Lead Member for Public Realm, said: “The messages about highly flammable costumes are ones which we should make sure all members of our families are aware of.

"Ensuring that safe products bought from reputable sources are the only products which enter our homes, should be seen as a priority for all families.”

* Children’s fancy dress costumes discovered without the CE mark should be reported to Trading Standards via the Citizens Advice consumer helpline on 03454 04 05 06.
Posted by llanblogger at 6:34 AM