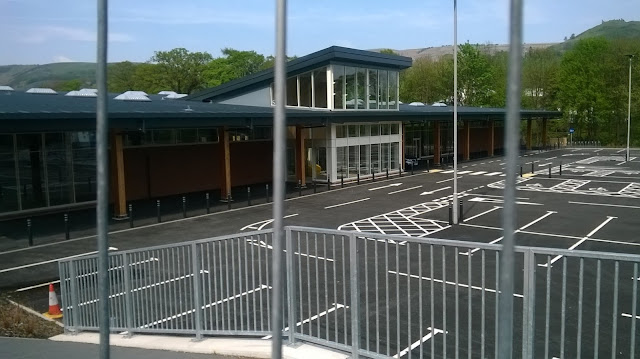 * The supermarket now to become Aldi, possibly next summer.

Llangollen's new Aldi store is expected to be open in summer 2017 creating up to 30 jobs, according to the company.

The discount grocery chain also says it aims to encourage links with other local traders.

Earlier this week Aldi won planning approval from the county council to occupy the town's "ghost" supermarket off the A5 on a shared basis with Home Bargains.

And in its first official statement to llanblogger, the company says: "Aldi is delighted to confirm that it has received planning permission for a high-quality new food store on Berwyn Street, following careful consideration from Denbighshire County Council.


"The site, which has been occupied by a vacant retail building for over a year, was originally planned to be occupied by Sainsbury’s. Aldi will now take on the site and bring its award-winning range of products to Llangollen.

"We are really pleased to be opening a new store in Llangollen. We understand that there is a strong local interest in the future of the Berwyn Street site, so we are pleased to announce that we will be taking it on and bringing it into productive use.


“Not only will the new store deliver a multi-million-pound investment in the local area and create up to 30 much-needed new jobs, it will also provide greater shopping choice for local people and help them save money on their weekly grocery shop.”


The statement adds: "Unlike other retailers, Aldi has a unique offering and does not act as a one-stop shop.

"Aldi stores do not have a butcher, fishmonger or bakery, nor do they provide childcare facilities or sell tobacco.

"Instead, Aldi is known for encouraging linked trips between its stores and other local businesses, encouraging residents to complete their shopping at other local shops, adding to the vitality and viability of the local area.


"Work on site will start in the coming months, and Llangollen’s new Aldi is expected to be open in summer 2017.

"Recruitment will start during construction: anyone interested in jobs at the store should register their details on www.aldirecruitment.co.uk"
Posted by llanblogger at 7:40 AM