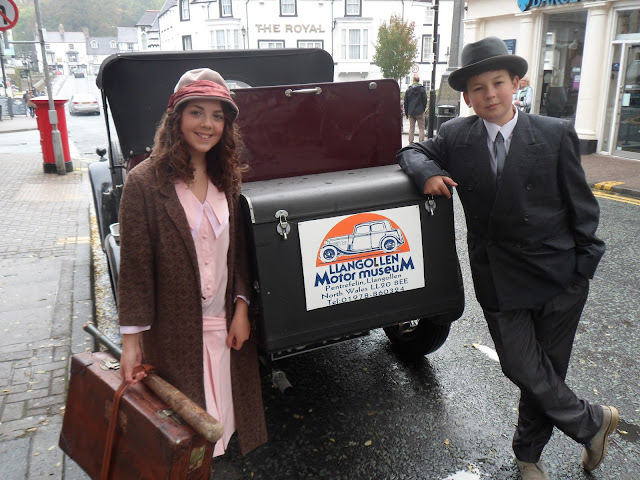 * Celyn Orton Jones as Blousey Brown and her co-star Cassius Hackforth in the title role of Bugsby Malone pose beside the vintage car as they shoot the promo video in Castle Street.

It was "lights, camera, action" for members of Llangollen Operatic's Young 'Uns recently as they shot a promotional film for their latest production.

The society's junior section will be staging the smash-hit kids musical Bugsy Malone in the Town Hall early next year.

Rehearsals started last month and the 40-strong cast reckon they already know most of the songs from the piece which has words and music by Paul Williams and a libretto by Alan Parker.

Two of the main performers were out last weekend filming scenes from the production which cleverly puts a rip-roaring tale of 1920s gangsters into a kids' setting.

Some of the action for the movie took place in the period setting of Llangollen steam railway while a gleaming vintage car lent extra authenticity.

Celyn Orton Jones plays Blousey Brown. She's been part of the Young 'Uns for seven years and had numerous cameo roles but this is her first principal part.

She said: "This was my first experience of being filmed for a video. Going on the train was an adventure and good fun.  The ride in the car was awesome!"

Her co-star was Cassius Hackforth who plays Bugsy Malone.

Another seasoned Young 'Uns performer, he has landed the award for best performer in the last two shows but this is also his first lead role.

Cassius, who has been busy performing with National Youth Music Theatre over the summer months in The Pied Piper of Hamlin, said: "What an enjoyable experience, having access to such amazing local facilities, such as the railway station, and using a genuine 1920s car to drive around Llangollen in."

Assistant producer Dee Smith said: "Filming in town for our promotional video, which is being created by Barrie Potter, was great fun.

"Llangollen Railway  kindly allowed us to film Bugsy and Blousey on the station and in the old-style carriages.

"Llangollen Motor Museum gave us enormous help by making driver Geoff Owen and their 1926 vintage convertible  - the same one that Terry Waite uses in the Eistedfodd parade- available  for us to film Cassius and Celyn.

"Bailey's Delicatessan provided a film set for Blousey and Bugsy's meeting and Banardo's kindly lent us some tea-cups at the last minute.

"We really want to thank them all for their assistance."

* Bugsby Malone will be staged from February 16-18, including Saturday matinee. Tickets are now on sale via www.ticketsource.co.uk/llangollenoperaticsociety priced at £10 for adults and £8 concessions.
Posted by llanblogger at 6:41 AM