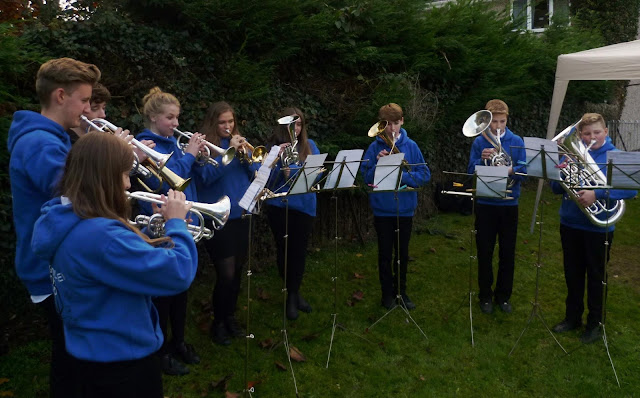 * The Youth Band playing at Pontfadog.

Members of Llangollen Youth Band were delighted to play at the unveiling of a new children’s play area in Pontfadog on Thursday, October 20.

The grand opening was a celebration of four years of fundraising by the local community, led by Pontfadog resident Rachel Maries.

Amongst the members of the youth ensemble was Rachel’s son, Tom, who plays tuba in both the Youth and Senior Bands.

The band played a number of Welsh classics such as 'Men of Harlech' and 'All through the Night'.

A spokesman for the band said: “We were delighted to be able to send members of our talented Youth Band to the opening of the new children’s play area in Pontfadog.

"Our congratulations go to all that have been involved in the fundraising efforts and we hope that local children enjoy the new facility for years to come."

Posted by llanblogger at 8:11 AM