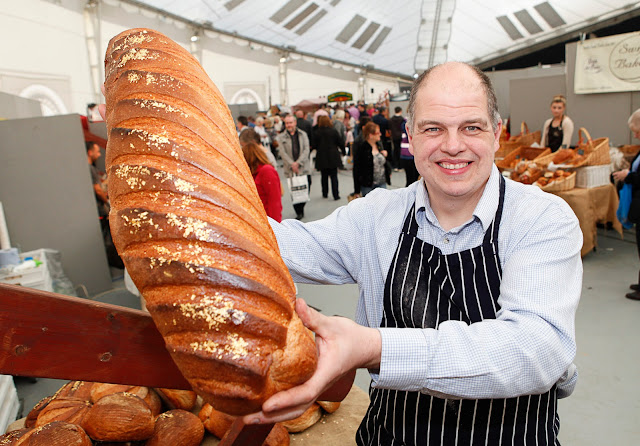 A culinary expert who trained under chef to the stars Raymond Blanc will be championing local produce at one of the UK's best-loved food festivals.

Robert Didier, whose unique brand of pies, pastries and bread has tantalised the taste buds of the food industry’s toughest critics, will be the first to feature in a host of cooking demonstrations at Hamper Llangollen this weekend, October 15 and 16.

The popular event in the picturesque Denbighshire town has been hailed as one of the UK's top 10 food festivals by both The Independent and the Daily Telegraph.

The restaurateur turned businessman, whose gastronomic finesse has been enjoyed by some of Hollywood’s biggest names including Sean Connery and Catherine Zeta Jones, is excited to be getting back behind a frying pan, where it all began, to show off the region’s finest, home-grown ingredients.

Robert's handmade bakery business, Wrexham-based Orchard Pigs, continues to go from strength to strength and scooped its first two Great Taste Awards this year for its fruit cake with cheese and gingerbread. The prestigious awards, organised by the Guild of Fine Food, are the acknowledged benchmark for fine food and drink.

“I’ve always loved demonstrating, it goes back to my restaurant days. I don’t find it very stressful at all now,” he said.

“It’s like the first time you do a public speech – you spend the first minute judging what the crowd are like and then get into your stride. Most audiences at food festivals have come along to be inspired by food and cooking and that’s what I intend to do.”

Robert will open the festival’s cooking programme on October 15 and among the culinary delights he plans to demonstrate is a feast of Welsh rack of lamb, supplied by D & J Thomas & Sons family butchers in Wrexham, locally-picked wild mushrooms and farm-to-doorstep vegetables as well as a mouth-watering desert of Tarte Tatin with hedgerow fruits and apples.

The top chef, who employs five people, is passionate about supporting local food businesses and growers and protecting the livelihoods of independent suppliers.

“It’s always important to back local producers, if we don’t support local farmers and businesses then our food will be imported from overseas. They might be able to produce it cheaper but the quality and taste isn’t the same,” said the 50-year-old, who runs Orchard Pigs alongside his wife, Nicky.

“If something has been on a lorry for two to three days, it’s not going to offer the same quality. If you buy local, the produce is picked locally and is fresher, there’s more flavour and there’s a better quality overall.

“You can talk to local suppliers and engage with them. If you ask your local butcher for something specific, like pig cheek for instance, they will say ‘no problem’ because they have the whole beast there in the shop.

“But it’s not all about taste. You’re also supporting the infrastructure, providing jobs for youngsters and apprentices. As small businesses grow, they employ people and train them up so that hopefully one day they will go on and start their own business.”

Robert, whose French father was a chef, spent his early career working at Raymond Blanc’s bakery and patisserie, Maison Blanc, in Oxford, which supplied Harrods and a host of top London restaurants with traditional French bread and patisseries.

A stint in the kitchen at Blanc's double Michelin starred restaurant, Le Manoir aux Quat'Saisons, in the Oxfordshire village of Great Milton, followed before he travelled to the Valence region of the south of France with his grandmother for a year while he worked as a second chef in a bakery and patisserie.

Robert later opened his own restaurant, Petit Robert, in the Borough Market area of London, before it was compulsory purchased to make way for a new railway line.

He moved to Bwlchgwyn in 2003 where he bought Nant y Ffrith forest, a 250-acre mixed woodland, and populated it with a herd of Oxford sandy and black pigs. What originally started out as a means of managing the undergrowth soon became a thriving business with Robert selling pork, bacon, hams and sausages at farmers’ markets.

The handmade pies followed and went on to become the focus for the business, with 1,000 to 1,500 now made every week – including Robert’s trademark Tractor wheel pie, using local free range produce.

The business, which is now in its 13th year, now boasts no fewer than 130 products from artisan breads and cakes through to luxury pastries and deserts – success Robert credits to wife, Nicky, 43, who has led the path to expansion.

“Nicky is a much better salesperson than me and she organises me – I can bake but she is behind the new product development and building sales at the markets and festivals,” he admitted.

Previously, the chef unveiled the UK’s most expensive loaf at Hamper Llangollen, made with champagne and 24 carat gold at a cost of £25.

To this day, Robert remains at the centre of the business operation – in the kitchens.
“I still love the baking side of things,” he said.

“I love making bread – it’s my first passion – and there’s always something new to learn. It really tests your skill as a chef, judging what’s going on with the temperature in the room and how it’s going to impact your bread.

“It really keeps you on your toes.”

Returning to Hamper Llangollen is always a treat for the chef, who has been a regular for the last 10 years at least.

“Llangollen is a focus for us every year,” said Robert.

“Although it attracts a lot of local people, you get visitors from across the UK who come along for the weekend. Many of the visitors have been coming along as long as we have and you get to know them.”

Hamper Llangollen chair Colin Loughlin is delighted the food festival has played a part in the Orchard Pigs success story.

He said: "Robert is a multi-talented culinary expert and is a very welcome regular at Hamper Llangollen.

"We're all looking forward to his demonstration, particularly because he will be championing local produce which is what Hamper Llangollen is all about.

“Thanks to a whole host of indigenous companies, North East Wales is rapidly establishing a reputation as a centre of excellence for high quality products.

“The food festival is a perfect shop window for the companies who form the backbone of the local economy."

* For more information about Hamper Llangollen go to www.llangollenfoodfestival.com
Posted by llanblogger at 6:39 AM