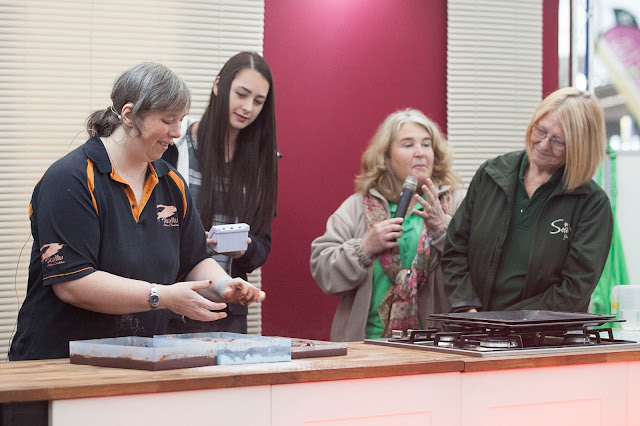 * Jo Edwards breaks the truffle rolling record at the show.

A chocolatier from North Wales has become the fastest truffle maker on the planet after smashing the world record in front of a cheering crowd at a food festival.

Jo Edwards broke the record of TV chef Gino D’Acampo in the main demonstration kitchen at Hamper Llangollen over the weekend and has now sent off the evidence to the Guinness World Records.

It was the perfect way for Jo, 42, to celebrate the 10th anniversary of her artisan chocolate company, Aballu, which she founded in 2006.

According to Jo, it was more difficult than expected because the chocolate was stickier than normal making rolling and coating the truffles harder than usual.

Even so, she still managed to better D’Acampo’s total of 47 in two minutes with a new world best of 49.

The record was one of the highlights of Hamper Llangollen - now recognised as one of the top food festivals in the UK - which attracted thousands of foodies to the picturesque town in the Dee Valley.

Jo said: “It was a fantastic experience and the number of people in the audience was amazing, they really got behind me. I also had family who travelled from Manchester and South Wales to support me.”

“The Hamper Llangollen food festival has been brilliant and very, very busy; I’ve had a wonderful time introducing visitors to my artisan chocolate products.

“I make everything on site in Rossett and currently employ two people but I’m looking to expand.”

Hamper Llangollen chairman Colin Loughlin was delighted with the attendance at this year’s event.

He said: “It’s been brilliant and we are really pleased. This is our 19th year and the festival is clearly now a very well established and extremely popular event on the calendar of food lovers across North Wales and beyond.

“I’m delighted we continue to attract the very best exhibitors and suppliers to the festival and which helps brings so many visitors to then town.”

Also there was one of Britain’s youngest sommeliers, Dan Davies, 21, who has advised stars like Sir Tom Jones, actress  Jennifer Lawrence and Coldplay's Chris Martin on which wine to choose with their meals.

Dan, the son of celebrity chef, Dai Chef, has attended the festival every year since he was just five years of age and now works as the head sommelier at the four rosette Stovells hotel at Chobham, Surrey.

At Hamper Llangollen, he helped his dad present cookery demonstrations by talking about wines as well as sampling the delights of the food festival.

He said: “Stovells is a classic restaurant with a Mexican flare and my job is to run the department and buy the wines we sell. Wine is my passion and I trained over three years.

“I have advised singer Tom Jones on wines when he came into the restaurant for a meal and when I worked at the Clifton, a three rosette restaurant in Taplow, Berkshire.

“I also advised Jennifer Lawrence and Coldplay’s Chris Martin on their wine choice and took care of Heston Blumenthal when I was at the Clifton too.”

He added: “The Hamper Llangollen food festival is a wonderful event. I have been coming with dad and the family since I was a little boy and it’s always an event I look forward to.

“The quality of the products on display is first class and the range of exhibitors is amazing. It’s a really special event.”

Festival visitors were treated to flutist Maria Hayes as she played on the stall of Denbigh gin maker the North Star Distillery.

The artisan gin is the brainchild of hospital worker Mathew Rowland who launched the first new distillery in the Conwy hills for more than 100 years to produce his folk music inspired new gin.

Margaret Rowland, Matthew’s mum, says the classic gin distilled by her son is infused with music.

She said: “Matt is a keen folk musician and Morris dancer and plays musical instruments as the gin is fermenting; hence it is infused with the music of the region.”

The head chef of Gales, Llangollen, Jack Hatley, took to the demonstration kitchen stage to prepare a lamb shawarma for the audience and said he was amazed at how good the festival was.


Jack, who has previously worked in the kitchens of the Chester Grosvenor, also teaches regularly at Upstairs Downstairs, a cook shop in Oswestry which runs cookery lessons in everything from bread making to Greek or Italian cooking.

He said; “It’s my first visit to Hamper Llangollen and I’m really, really impressed. The variation and quality of the products on display is amazing."

Brian Horwich, who runs Pant Glas Bach Preserves, at Llanasa, says he has been attending and exhibiting at Llangollen since launching his business eight years ago.

He said: “I’m really happy with Llangollen the festival is always a highlight for me. I find regular customers come back year after year to buy from me and being in exactly the same place inside the exhibition hall each year helps too.

* For more information about Hamper Llangollen go to www.llangollenfoodfestival.com
Posted by llanblogger at 11:25 AM