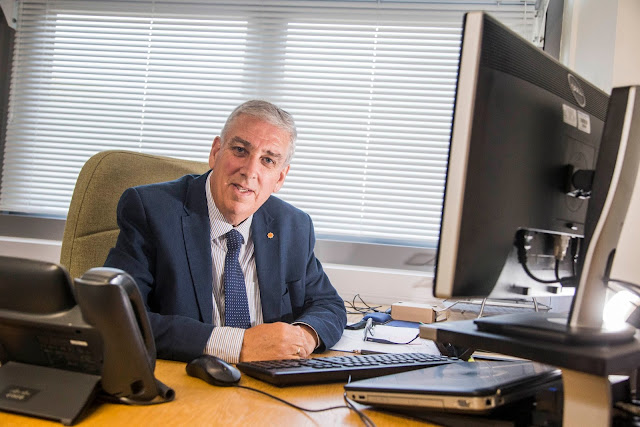 * North Wales Police and Crime Commissioner Arfon Jones.
A police boss says vital services for victims of drug abuse in North Wales can make better use of £12 million in funding thanks to the Welsh Government decision to abandon a council shake-up.
According to North Wales Police and Crime Commissioner Arfon Jones, the stability of working with existing public bodies will help him deliver on promises in his Police and Crime Plan by working collaboratively across the region with local authorities and the Betsi Cadwaladr Health Board.
He has pinpointed building effective partnerships as a cornerstone of his work and he said: “We need a co-ordinated approach with everyone working to the same plan and I have prioritised services to the victims of domestic abuse, substance abuse and the victims of crime.
“In the area of substance abuse there are various pots of money available but different agencies are commissioning services separately and I want us to provide services together, avoid duplication and get more bang for our buck.
“This is a project that is ongoing and will be helped by the Welsh Government’s decision to scrap plans to slash the number of local authorities because there is £12 million plus available and if we can bring it all together there will be more money for the front line.”
His intervention comes after Wales’s Local Government Minister Mark Drakeford’s announcement that the Welsh Government no longer planned to cut the number of local authorities from 22 to as few as eight.
In North Wales this would have meant the existing six authorities being pruned to three or even two but the £250 million bill and the expected 2,000 job cuts have dissuaded the Government from pursuing the controversial policy.
Mr Jones said: “I fully support and welcome this decision because it will help me to work collaboratively to deliver vital services such as those that help victims of domestic abuse and substance misuse.
“That is a key part of my Police and Crime Plan and it means we can continue to work with our partners the local authorities, the health boards and the fire and ambulance services which will all be affected by Professor Drakeford’s proposals.
“One thing I would caution about is that as part of the process he looks at the number of statutory bodies otherwise all we will be doing is attending meetings and I see this as an opportunity to rationalise these strategic bodies so we can get on with the real work.
“I’m not one to get hung up on infrastructure. What I want is to get the best structure to deliver the most appropriate services most efficiently to the people who need them.
“The Minister must also not forget the role to be played by the non-devolved organisations like the Police, the Probation Service, the National Offender Management Service and the Prison Service in delivering these vital services to the people of North Wales.
“It is important that he issues guidelines to include us as stakeholders within the new regional partnerships.”
His response comes in the wake of the decision by Professor Drakeford to scrap the proposals that were the brainchild of his predecessor as Local Government Minister, Leighton Andrews.
Instead he has set out “a new way forward” which would instead see closer collaboration between neighbouring councils and key services delivered regionally.
Mr Jones added: “This is the right way forward and local authorities will remain as the alternative would cost too much, cause a major upheaval and cultural issues but would put back the delivery of services.
“The main concern should be what services look like and how effective they are and not the structures for their delivery.”
Posted by llanblogger at 6:44 AM