The Clwyd South AM said he was delighted that communities minister Carl Sargeant had awarded a £500,000 grant for the facility, which was saved from the bulldozers after Wrexham Council leaders voted to demolish it in 2014. 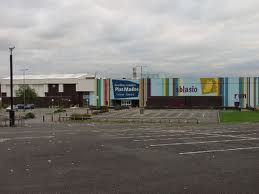 “This £0.5m grant is massive for Plas Madoc, and I’m delighted for the team that their application has been successful. They really deserve this,” said Mr Skates, who was a founder member of the charitable trust set up to save the centre.

Mr Skates added: “I’m proud that the Welsh Labour Government has shown its support for Plas Madoc Leisure Centre, and I would like to thank Carl Sargeant for awarding this grant.

“The volunteers who run the Trust and the centre’s hard-working staff have done such an amazing job, from rescuing and reopening it initially to making it the success story it is now.

“The fact that Plas Madoc is even still standing is testament to a people power, and the public need to continue to support it as they have done so brilliantly over the past two years.”
Posted by llanblogger at 7:39 AM