Wynne – who shot to stardom as the waiter who belted out catchy jingles in the Go Compare TV ads (pictured) – will be taking to the Llangollen International Musical Eisteddfod stage for the third time in four years when the festival gets underway in July. 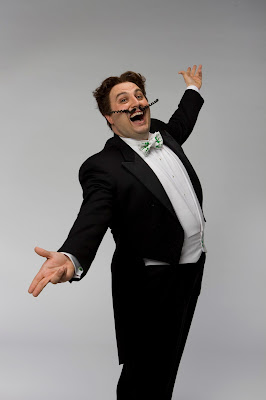 The multi-talented Carmarthen-born singer, TV and radio presenter will be performing on Wednesday, July 8, at an evening of music dedicated to The Sounds of South America that also features the BBC National Orchestra of Wales. Catrin Finch will also be starring at the concert.


The concert will also see the world premiere of a new work to celebrate the 150th anniversary of the Welsh colony in Patagonia in South America.
The work has been written by composer Hector MacDonald, a fourth generation Welshman who comes from Chubut Province in Patagonia where descendants of the original settlers cling on to their Welsh identity.
Among the other highlights at this year's Eisteddfod will be the Thursday night concert when heart-throb tenor Alfie Boe will be joined on stage by Britain’s Got Talent star Jonathan Antoine.
Other big draws include Oscar-winning music legend Burt Bacharach, the immensely popular Canadian singer-songwriter Rufus Wainwright and TV choirmaster Gareth Malone.
For the final concert, Ali Campbell, the voice of UB40 who sold 70 million records, who'll be reunited on the eisteddfod stage with two other founding members of the group, percussionist, trumpet player and vocalist Astro and keyboard player Mickey.
Wynne, who will also be presenting his BBC Radio Wales show from Llangollen during the week-long eisteddfod, says he always looks forward to performing at what he describes as a "wonderful festival of music".

He said: “Most performers only get to appear on the Llangollen stage once or maybe twice so for me to have been allowed on stage three times and in relatively quick succession is probably something of a record.

“Llangollen is such a fantastic event that welcomes all these different cultures from all over the world in a spirit of peace and harmony.

“It’s just an incredible event. I love seeing the different performers throughout the week and it isn’t just about classical music; lots of varied genres are represented.”

Wynne, who performed the role of Piangi in the 25th anniversary performance of The Phantom of the Opera which was broadcast live to cinemas around the world from the Royal Albert Hall, added: “The festival is something special and should be cherished. People come from far and wide because of what it stands for.

“Where else could you see traditional Welsh dancers competing against folk dancers from around the world?

“It’s about culture and styles and bringing it all together in a spirit of friendship. And it’s also wonderful seeing the whole town join in the festivities it isn’t just about what’s happening on the field.”

Wynne whose alter ego Gio Compario in the Go Compare ads was once voted Britain’s most hated man, is looking forward to hooking up with the BBC National Orchestra of Wales and Catrin Finch.

He said: “Catrin is a friend of mine and someone I’ve worked with her a lot over the years. And as well as being a friend she’s also one of the greatest harpists in the world, there’s no doubt about that.

“And I have toured with the BBC orchestra and we worked together at the Christmas concert. Of course I work with the BBC, both on screen and behind the radio microphone with my radio show, on a regular basis.”

Wynne, whose debut album, A Song in my Heart, shot straight to the top of the classical charts, added: “It should be a wonderful night of music.

“I’m going to performing some material composed by Karl Jenkins who, it has been announced, is to be knighted by Her Majesty the Queen.

“I’ll also be performing songs written by an Argentinian composer and some songs from West Side Story which has tenuous links to South America in that the characters were Puerto Rican.

“But it’s always good to perform some popular works that the audience will instantly recognise.”

The Eisteddfod's musical director, Eilir Owen Griffiths, is delighted Wynne Evans has agreed to perform again on the pavilion stage.

He said: “Wynne is a real supporter of the festival and it’s always a pleasure to welcome him back.

“He is without doubt one of the UK’s most popular and exciting tenors and I know how much the Llangollen audience likes to see and hear him perform.

“The Wednesday evening concert of South American inspired music, featuring Catrin Finch, Wynne Evans and the BBC National Orchestra of Wales promises to be a real highlight of this year’s festival and it’s a concert I’m really looking forward to.”


* To book tickets and for more details on the 2015 festival go to the website at www.international-eisteddfod.co.uk
Posted by llanblogger at 6:51 AM