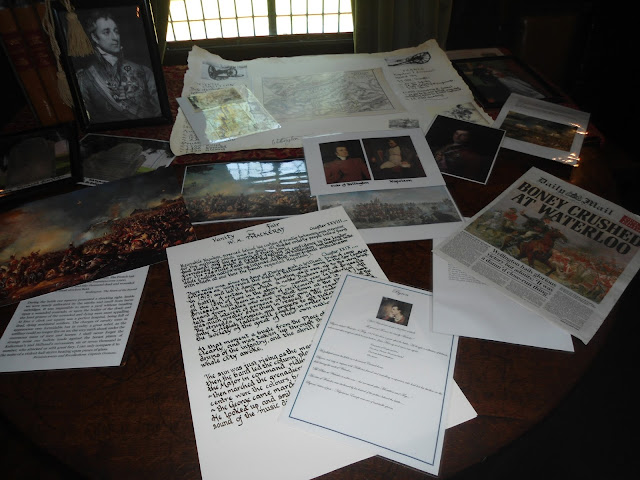 * The Waterloo display on the dining table at Plas Newydd.

PLAS Newydd, Llangollen’s own stately home, is currently staging a special display to mark the 200th anniversary of the Battle of Waterloo.


The famous house has a connection to the battle as its most famous inhabitants, the Ladies of Llangollen, at least twice hosted visits there by the victor, the Duke of Wellington.
Lady Eleanor Butler and Sarah Ponsonby were friends of his maternal grandmother, Lady Anne Dungannon, and it was while visiting her home at Brynkinalt, near Chirk, that he called in to see the ladies at Plas Newydd.


Arthur Wellesley, as he was originally known, made his first visit there at the age of 19 in 1788 and it is believed he came a second time in the year preceding his most famous battle, which was fought in Belgium on June 18, 1815 and changed the course of European history.
In the very dining room where he breakfasted with the ladies, the house’s resident heritage assistant Jane Horovitch has arranged a display of Waterloo and Wellington mementos, including pictures of himself and other figures connected with the battle along with copies of various documents of interest.

Centrepiece is a large contemporary map of the battlefield.


Also featured is a copy of a letter penned by the Iron Duke in 1829, when he was Prime Minister, to Sarah Ponsonby telling her that the King had been pleased to grant her a pension of £200 a year following the death of Lady Eleanor who had enjoyed the same royal privilege.
There is also a picture of a well weathered gravestone at St Sulien’s Church in Corwen bearing the name of Jacko Parry, a claimed Waterloo survivor who died at the age of 73 in 1857.


Jane, who has been part of the team at Plas Newydd for the past 23 years, said: “We wanted to do something to mark the 200th anniversary of Waterloo because of the connections the Duke of Wellington had to the house.
“He was certainly a good friend of the ladies.


“They recorded after his first visit when he was 19 that he was `handsome, fashionable, tall and elegant’.
“We believe he came to Plas Newydd again not long before Waterloo, in either 1814 or 1815.”


The display, which will be open to visitors until the end of next week, will be flagged up outside the house by the British Union Jack flying alongside the tricolour of France whose army under Napoleon Bonaparte was defeated at Waterloo.
Posted by llanblogger at 7:23 AM