Llangollen Eisteddfod is a beacon of hope 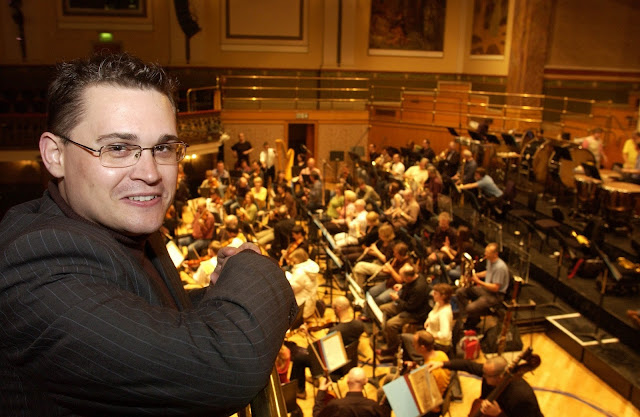 Royal composer Paul Mealor has hailed the Llangollen International Musical Festival as a beacon of hope and peace in an increasingly troubled world.

Professor Mealor, who was born in St Asaph, says the festival brings people from all over the world together through the international language of music.

He shot to international fame after writing Ubi Caritas et Amor for the wedding of Prince William and Catherine Middleton in 2011 and also composed Wherever You Are, which became the 2011 Christmas number one for the Military Wives under the baton of Gareth Malone.

Prof Mealor will be attending the Llangollen Eisteddfod as an adjudicator for the second time this year and for the first time as a vice president of the iconic event which starts on Tuesday, July 7.

He said: “The Eisteddfod is a phenomenal and wonderful event. The whole world comes to this beautiful little North Wales town to share music and culture. Racism, hatred and conflict lose and music wins every time.

“People might have differences, whether political or cultural, but they all speak just one language when it comes to music. And it isn’t just about classical music but all sorts of genres whether it’s folk, jazz, reggae or rock. It doesn’t matter.

“This year, for example, the legend that is Burt Bacharach is performing. How is it possible that a festival in a little North Wales town can attract world stars of that magnitude?

“That’s what the International Eisteddfod is all about, it’s just wonderful. Top quality musicians and performers such as Alfie Boe, Catrin Finch, Gareth Malone and a host of other top stars will be bringing wonderful music to the stage.”

Since 2003 he has been professor of composition at the University of Aberdeen.

He said: “It’s always busy, whether working with my students or composing new music, but one of the highlights of the year is always Llangollen. It shows the best of who we are. There is always such amazing new talent on show.

“The brilliant English physiatrist, Anthony Stoor was right when he said medicine will make you live longer but the arts will make you want to live longer. Imagine a life without music what a terrible world that would be.

“I’m really looking forward to adjudicating at this year’s festival, the standard is always exceptionally high. I competed there myself as a young boy but sadly failed spectacularly.”

Prof Mealor, whose first album for Decca, A Tender Light – a collection of sacred choral anthems – spent six weeks at No 1 in the classical charts, has stressed the importance of ensuring festivals such as Llangollen Eisteddfod receive adequate funding.

He said: “People need to realise how important the International Eisteddfod is and show people the benefits it brings not just to the immediate area but Wales and the rest of the UK as a whole.

“Funding in this day and age is always difficult but the festival stands for so much and it’s vital it continues to go from strength to strength.

“I would encourage anyone who has never been to the festival to go along, even for just a few hours, and soak up what is just an amazing and unique atmosphere.

“Where else would you find people from all over the world brought together in a spirit of peace and tolerance and through a love of one common language – the language of music.”

The Eisteddfod's musical director, Eilir Owen Griffiths, said: "I am thrilled that Paul is returning as an adjudicator this year.

"Paul is a big fan of the Eisteddfod and what it stands for as a melting pot of colour and culture dedicated to the notion of harmony in every sense of the word.

"As we approach the 70th anniversary of this unique festival next year, the magic of the Eisteddfod endures and its message of peace is as relevant today as it was in 1946 in the aftermath of the Second World War."

To book tickets and for more details on the 2015 festival go to the website at www.international-eisteddfod.co.uk
Posted by llanblogger at 6:43 AM