A MUSICAL maestro who led the school choir in which Oscar-winning actor Eddie Redmayne was a star performer will be one of the adjudicators at this year’s Llangollen International Musical Eisteddfod.
Ralph Allwood MBE was in charge of the world famous choir at Eton College when the young British actor, who earlier this year landed the Academy Award plus a BAFTA, Golden Globe and Screen Actors Guild Award for his stunning portrayal of Professor Stephen Hawking, was its lead singer in the early 2000s. 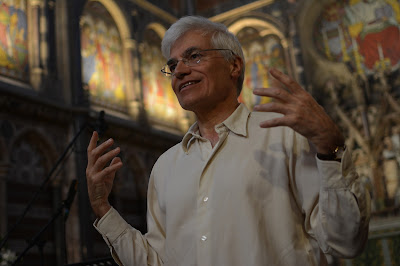 With a string of other prestigious musical accomplishments to his credit over more than 30 years, in July Ralph (pictured right) will once again bring his vast experience to bear in judging the cream of choral competitors from across the globe at the Llangollen Eisteddfod where he has been one of the guest adjudicators for over a decade.
For 26 years until 2011Ralph, 65, was Director of Music at Eton, the top people’s public school in Berkshire, and recalls that he was in charge of the college choir at the time - from 2000 to 2005 - when actor Eddie Redmayne was a key member.
He said: “Eddie was Keeper of the Choir at that time, which meant that he was the chief boy who was singing in it.
“I remember him as the nicest possible young man who was also a very good singer. He was a very useful tenor.
“I know that, apart from music, he was also very keen on acting and I was absolutely delighted to see that he won so many honours for playing Stephen Hawking in the film The Theory of Everything.”
After leaving Eton and going on to obtain his History of Art degree from Trinity College, Cambridge, Redmayne, a friend of Prince William at Eton, embarked on a successful career in theatre and film.
He brought the powerful tenor voice honed under Ralph Allwood’s guidance at Eton to bear in one of his most memorable big screen roles to date, as Marius Pontmercy in the 2012 blockbuster, Les Miserables, alongside Russell Crowe, Hugh Jackman and Anne Hathaway.
Also during his time at Eton, Ralph recalls being tutor to another student who went on to musical greatness, Edward Gardner, who eventually became conductor of the English National Opera.
“Edward was possibly one of he best known of the 13 boys to whom I was tutor who would go on to become conductors,” he said.
Another famous name of the musical world Ralph – now a freelance choral director - has worked with is Britain’s favourite choirmaster Gareth Malone, who he will meet up with again when Gareth  showcases his new choir at this summer’s Llangollen Eisteddfod.
The pair last teamed up when Ralph was a judge on the BBC2’s The Choir two years ago.
Ralph says of him: “He’s a really nice fellow and it was just wonderful to work with him on the series.”
At this year’s Llangollen Eisteddfod Gareth, who also masterminded the creation of the Military Wives choir, is looking forward to playing a part in the climactic Choir of the World event when choirs will compete for the prestigious Pavarotti Trophy.
Eilir Owen Griffiths, Musical Director of the Eisteddfod, said: “The guiding principle of the Eisteddfod is that it should involve people of the highest quality and Ralph is very much part of that tradition.
“He has tremendous experience at the highest levels in music and it is that quality and integrity that he brings to his role as an adjudicator and which helps make Llangollen what it is.”
During his own glittering career Ralph, who was made an MBE in the 2012 New Year’s Honours List, has become well known throughout the musical world for founding and directing the Eton Choral Courses which over the past 35 years have seen around 7,000 16-20 year olds receive week-long, residential courses providing intensive but fun training in singing and choral music.
He co-founded the Rodolfus Choir, made up of the best singers from the courses and which has produced over 20 CDs, and is founder and conductor of Inner Voices, a choir made up of singers from state schools in London.
Ralph is also Director of Music at the Old Royal Naval College in Greenwich with its Choral Scholars from Trinity Laban, and a conductor of the National Youth Choir of Wales.
He has conducted choirs for 40 live broadcasts for BBC Radio 3 and has written much music heard worldwide on radio and television.
Ralph is a Fellow Commoner and Assistant Director of Music at Queens’ College, Cambridge, and an Honorary Fellow of University College, Durham.
Another of his many roles is Choral Advisor to Novello, Wellington College and Trinity College, Oxford.
He teaches at Trinity Laban Conservatoire, Westminster Under School and at his old school, Tiffin.
Apart from his annual contribution at Llangollen Eisteddfod, Ralph, who has a Doctorate of Music from Aberdeen University, also adjudicates at the Cork International Choral Competition.
He said he is looking forward very much to adjudicating once again at Llangollen and added: “I’ve done it for the past 12 years or so and it’s always really lovely because it’s a unique and highly enjoyable festival.”
Among the highlights at this year's Eisteddfod will be the Thursday night concert when heart-throb tenor Alfie Boe will be joined on stage by Britain’s Got Talent star Jonathan Antoine.
Other big draws include Oscar-winning music legend Burt Bacharach, the immensely popular Canadian singer-songwriter Rufus Wainwright and Ali Campbell, the voice of UB40.
To book tickets and for more details on the 2015 festival go to the website at www.international-eisteddfod.co.uk
Posted by llanblogger at 6:50 AM