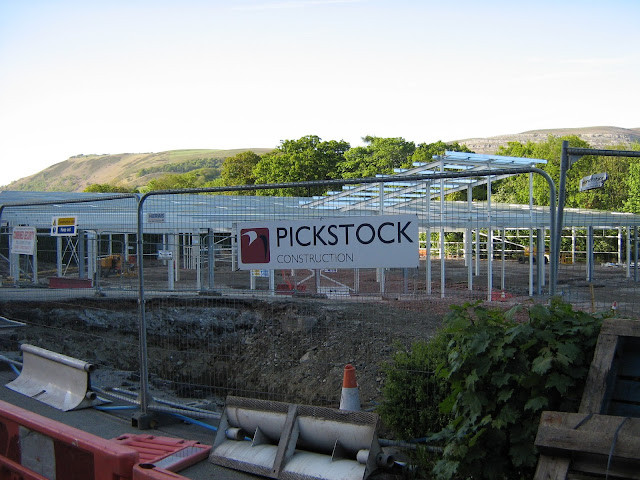 * The site where the supermarket building is emerging.

A COMMUNITY group in Llangollen has set up an online forum to gather residents’ views on what should happen to the supermarket being built in the town now that Sainsbury’s are no longer planning to use it themselves.

A few weeks ago the superstore chain made the bombshell announcement that, due to tough trading conditions, it would no longer be going ahead with opening a new store on the former site of the Dobson & Crowther printworks on Berwyn Road.

The news has led to widespread speculation about what should now be done with the 34,000 square foot building, the metal structure of which is currently being laid.

And this has prompted the Llangollen Cittaslow group to set up an online forum to which local people can contribute their ideas and suggestions for the building’s future.

Town councillor Phil Thane, who is leading the initiative, said: “Last month Sainsbury’s announced that they no longer planned to open a store in Llangollen.

“However, J Ross, the developers, are still building it and Sainsbury’s have a contract to take it once it's finished so they need an alternative use.

“A senior figure in Sainsbury’s property section has been quoted as saying that they are actively marketing the site to interested parties and would be interested to hear any ideas for the site, so we are complying with this.”

Cllr Thane added: “Whatever you think about Sainsbury’s and supermarkets in general, no-one wants an empty eyesore in town, so the Cittaslow Llangollen group decided to create a public forum where everyone can make suggestions.

“They have set it up and Sainsbury’s have promised to follow it.

“Now it's up to the people of Llangollen to make their feelings known.

“Click on Cittaslow Forum. You can join any of the discussions, or click on New Topic and start your own.

“If you haven't used the Cittaslow site before, you need to register.”