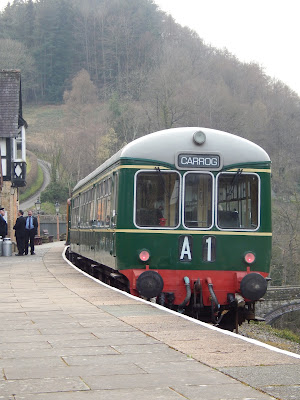 Llangollen Railway will be hosting a Heritage Railcar Gala tomorrow (Saturday) and Sunday, June 20 and  21.

An intensive service will operate along the 10-mile preserved line, using the trains which revolutionised the railways more than half a century ago.

Visitors will  be able to see the line as the driver sees it from the comfort of one of our heritage scenic observation diesel trains.


Making a guest appearance over the weekend will be a 1958 vintage Class 122 'Bubble Car' from Derbyshire, which will be in Wales for only a few days.
It will operate both on its own and in multiple with members of the home fleet, including the Wickham and 127 sets, enabling a five-car rake of green vehicles to be put together.

The event, which is often seen as one of the highlight of the UK's heritage railway calendar, will feature a half-hourly service as far as Carrog,with alternate trains continuing onwards to Corwen on the line’s recently-opened 2.5 mile extension.
All intermediate stations will be open and will offer opportunities for exchanging trains.

Supporting the visitor will be four of the line’s resident fleet of units, the Birmingham RCW Class 104, the Derby works Class 108, the Wickham Class 109 and a hybrid of a Class 127 power car and a Class 108 trailer.
There will also be a steam diagram which will be covered by the GW push-pull ‘autotrain’ powered by Pannier Tank 6430, which is imminently due to re-enter service after its ten-year overhaul.

Another feature is a photographic evening on the night immediately before the event featuring the Class 122 and an evening train on the Saturday where fish and chips or a barbecue will be available.
* Full details are available at: http://llangollenrailcars.co.uk/Gala2015.php and http://www.llangollen-railway.co.uk/event/heritage-railcar-gala-2/
Posted by llanblogger at 9:06 AM