Trains through to Corwen "exceed expectations"

At the end of a short season for passenger trains on its new extension to Corwen, Llangollen Railway has hailed the operation a "great success which exceeded expectations".


In the first 10 days of operations after the first trains for supporters ran on October 22, nearly 4,000 passengers sampled a ride on the 2.2 mile extension beyond Carrog.
For seven days of the half term holiday the trains operated as one steam locomotive with four coaches for the scheduled three trains a day, when the engine ran with a special headboard, The Corwen Revival.
The trains early in each day were fully loaded with visitors eager to experience the journey to the new temporary terminus, known by the bilingual name as Dwyrain Corwen East. 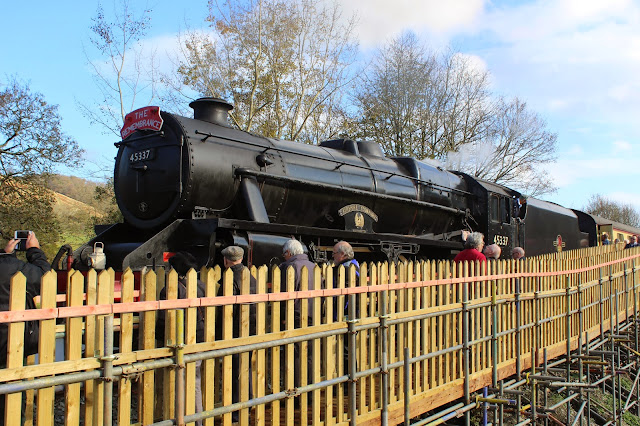 * Black Five 45337 with The Remembrance as viewed from the access ramp at Dwyrain Corwen East on November 9.

Kevin Gooding, general manager of Llangollen Railway, said: "We are delighted with the public response to the Corwen train services. Visitors have come from near and far to sample the extended line.

"As well as those who travelled by train from Llangollen, others joined the train at Corwen to sample the reverse journey option.
"This is a passenger flow we wish to develop next year when a full season of operations will commence following an official opening for the station at Dwyrain Corwen East on March 1."
Ken Skates, Welsh Assembly member for Clwyd South, who was on the first public train on October 27, said: "It is fantastic to see this Welsh Government-supported project going full steam ahead after decades of incredible hard work and dedication by an amazing team of volunteers.
"While this restoration project has been a genuine labour of love for those involved, the unbelievable amount of blood, sweat and tear that’s gone into this fantastic achievement cannot be over estimated.
"They have turned a mission impossible into a reality and created something we can all be exceptionally proud of."
During the final weekend of trains, on November 8 and 9, the locomotive, Black Five, No.45337, ran with a special headboard, The Remembrance, to mark the national commemoration of the centenary of the First World War.
In addition, the owners of the locomotive, the 26B Loco Company, arranged for the nameplate Ayrshire Yeomanry to be fixed to the running plate, as formerly carried by long lost class mate No.45156.

The railway says that whilst the train operations were successful, some lessons have been learned about passenger expectations and that their needs will be incorporated into the procedures for the next series of trains to Corwen during the Mince Pie Special season from December 26.
In the meantime work will continue with the fitting out of the facilities at the temporary station which requires, amongst other things, the provision of electric power with a link up to the mains supply and the completion of a footpath to the entrance.
George Jones, for Llangollen Railway, said: "Everyone is pleased with the success of the trains on the extended line.
"However, the operation has demonstrated the limitations of terminating at the phase 1 station which is without facilities to run an engine around the train.
"This emphasises the need to proceed to the phase 2 terminal station nearer the town centre directly funding can be secured for this final stage of the extension project. Only then will all the advantages of serving Corwen be realised."

Posted by llanblogger at 7:00 AM