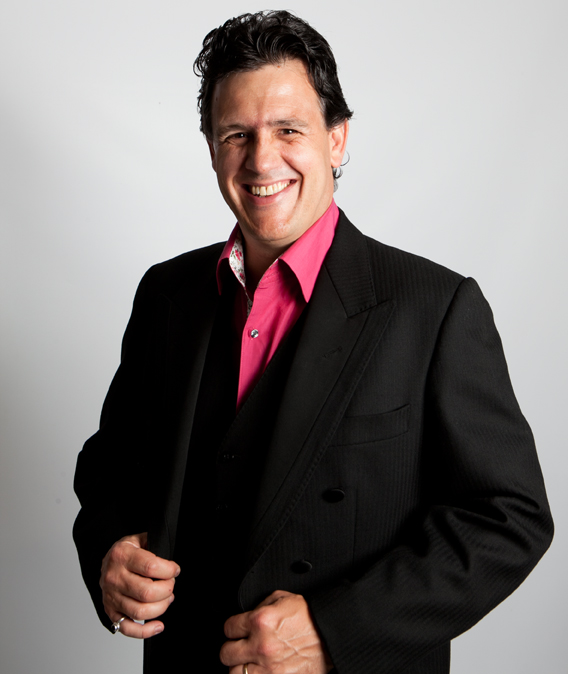 Every year the Eisteddfod turns Father Christmas by providing over £20,000 of travel and accommodation for competition entrants from as far afield as the Philippines and South America as well as Africa and Eastern Europe.
The Christmas Carol Concert at the Royal International Pavilion, which takes place this year on Sunday, December 14, plays a vital part in that fund-raising effort.
Rhys Meirion (pictured right), who lives in Pwllglas near Ruthin with his wife, Nia, and three children Osian, 18, Elan, 15 and Erin, 13, says he’s delighted to have the opportunity to help support young international competitors dreaming of travelling to North Wales to compete.
The schoolteacher turned opera star made his New York Carnegie Hall debut earlier this year in the premiere of Karl Jenkins’ The Bards of Wales, said it’s vital to support one of the world’s best international competitions.
Rhys, one of Wales’s very own Three Tenors – the others are Aled Hall and Alun Rhys-Jenkins, said: “Llangollen is such a special event which has so much tradition associated with it. I was in Budapest recently and speaking to people there it’s clear the economic climate remains difficult to bring choirs of young people over to Wales to compete.
“Air fares alone are astronomical so this concert to support the Bursary Scheme for international competitors from developing countries is a great idea.
“I always look forward to visiting the International Eisteddfod as a performer or a visitor. It’s a magical event and gives young people in particular an experience they will never forget.”
The Llangollen December concert will cap a busy year for Rhys in which he has just published his autobiography, Stopio’r Byd Am Funud Fach (Stop the World for a Minute).
In the book he tells of his anguish at his younger sister Elen’s tragic death following a fall, the effect it had on his family and his determination to honour Elen Meirion’s memory by raising awareness of the importance of organ donation.
He said: “We were very close and I treasure the time we had together as brother and sister. It’s important to me that I campaign as much as I can to raise awareness of organ transplants.
“It was what Elen wanted and we take great comfort from the fact as many as five people benefitted after receiving Elen’s organs following her death.
“Of course I am still affected by Elen’s death but losing her also gives me strength in many ways as I always feel she is there on stage with me.
“I know people who have been in a similar position to me and have lost someone close and they say they feel the same way. It’s something you can’t explain, that feeling that someone is there with you. You can feel their presence.”
He added: “My sister’s passing also taught me another important lesson in life and that’s to make the most of every day. The fact is, every day is a special gift.”
And Rhys is always looking for ways to boost his fundraising efforts for the Elen Meirion Fund which supports people in Wales who are in need of an organ transplant as well as other good causes.
On Wednesday, December 10, he’s performing at the Gates Art Centre, Cardiff for the Cardiff Sinfonietta’s 10th anniversary concert in aid of Elen’s fund and Velindre Cancer Care and the following night he is presenting An Evening with Rhys Meirion, again in Cardiff, in aid of Kidney Wales.
It’s a Christmas concert with soprano Ellen Williams, the Pendyrus ,Male Voice Choir and Lucie Jones, of X-Factor fame who has now gone on to star in musical theatre.”
Back in Llangollen on December 14 Rhys will be joined on stage by teenage sensation Dewi Wykes, the schoolboy from Gellifor, near Ruthin, who came through auditions to make a huge impression alongside Bryn Terfel in the International Eisteddfod’s acclaimed Sweeney Todd in July.
Rhys said: “It’s going to be an amazing evening. I’m going to sing some carols and a few classical pieces accompanied by pianist Annette Bryn Parri. I have worked with Annette, who is unbelievably talented, many times over the years.
“Dewi Wykes, the boy selected to star in Sweeney Todd alongside Bryn Terfel and Sian Cothi at Llangollen in July is also appearing and, hopefully, fingers crossed, we will do a little something together.
“Add to that the Llangollen Silver Band, the choir of Ysgol Morgan Llwyd, who won the Eisteddfod’s Show Choir event in July, and the children of Mountain Lane Primary School and we are going to have a wonderful Christmas concert.
“It’s always a pleasure to perform at Llangollen as the audience is so knowledgeable. There is a level of expectancy, they really do know, understand and love their music.”
And once Christmas is over 2015 promises to be another busy year for Rhys with radio and television commitments for the former schoolteacher who took the plunge in 1997 and gave up his job as head of Ysgol Pentrecelyn, near Ruthin, for a life in music.
He said: “Regrets? The answer has to be no, not at all. As much as I enjoyed working in a classroom it doesn’t quite feel as good as walking out in front of an expectant audience knowing you have to deliver. That’s my workplace now and it’s something I really do enjoy.”
Christmas at Llangollen 2014, organised by the Llangollen International Music Eisteddfod’s Music and Staging Committee, will take place on Sunday, December 14, at 7.30pm.
Tickets, priced £10 (£8 concessions), are available from the Llangollen International Musical Eisteddfod office at the Royal International Pavilion, Gwyn Davies, Butchers, Castle Street, Llangollen and Jades Hair and Beauty, Oak St, Llangollen.
For more information about the 2015 Llangollen International Music Festival visit www.international-eisteddfod.co.uk
For more information about Rhys Meirion and for details on where to buy his autobiography, Stopio'r Byd Am Funud Fach, £9.95, visit www.rhysmeirion.com
Posted by llanblogger at 7:03 AM