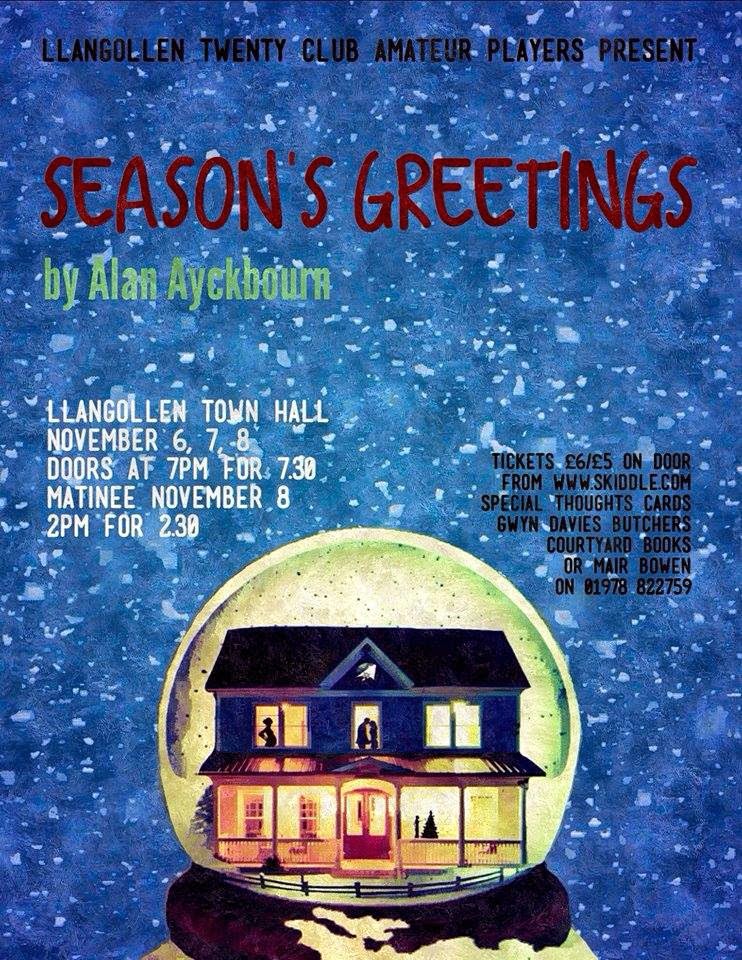 Christmas has come early for Llangollen audiences as the Twenty Club stages its rib-tickling version of the Alan Ayckbourn play Season’s Greetings at the Town Hall on three nights this week plus a matinee on Saturday.
Despite having been in business for over 60 years, the club has lost none of its vitality and has assembled a formidable nine-strong cast for this black-ish, often farcical, comedy by the old master which tells the tale of a dysfunctional family spending the festive season uncomfortably together in an average English suburban house.


A number of excellent new players have been recruited to strengthen the already-powerful core of established actors.
These include David Edgar, who gives a brilliant portrayal as man of the house Neville. He’s an electronics retailer without any energy to spare on his wife Belinda, who is played to perfection by another very useful newcomer Paula Sutton.


Fresh in the club’s ranks too is Robin Cowley, who turns in a neat performance as Neville’s pretty useless mate Eddie.
The role of Clive, the novelist who arrives at the house to spend Christmas with his girlfriend Rachel, Belinda’s nervy spinster sister, is taken by another new face, Mathew Oswald-Haggett, who fits it as snugly as a winter glove.


This was also the first Twenty Club appearance for Ellie De Bolla who proves a suitably nutty Phyllis, the wife of another family friend, Bernard.
That part – an ineffectual doctor with a penchant for pathetic puppet shows, is taken by club first-timer Christopher Sims who has already shown his on-stage prowess with the likes of Llangollen Operatic Society and brings to it a very deft comedic touch.


Twenty Club stalwart Mike Law provided a marvellous interpretation of Harvey, a cantankerous old bore who exhibits just about every “ism” in the book and also has an unhealthy habit of carrying around an armoury of knives and guns.
Another club favourite Liz Evans takes the part of Rachel with aplomb and experienced Twenty hand Nicola Holmwood makes a perfect Pattie, bumbling Bernard’s long-suffering missus.

The whole thing is a credit to director Natalie Evans and producer Anna Turner and the entire behind-the-scenes team deserve a pat on the back for providing a very classy setting.


There’s nothing too complicated about the plot which revolves around a bunch of people who don’t get on all that well being forced to spend yet another Christmas together.
The interplay between them sparks lots of laughs and the end goes with quite a bang, although I’d better say no more about that because Season’s Greetings still has three more performances to go – one tonight and two on Saturday, including the 2pm matinee, and I wouldn’t want to spoil things for those who have yet to see it.


So give yourself an early Christmas present by getting along to the Town Hall to catch this stylish and very funny production.
Posted by llanblogger at 7:56 AM