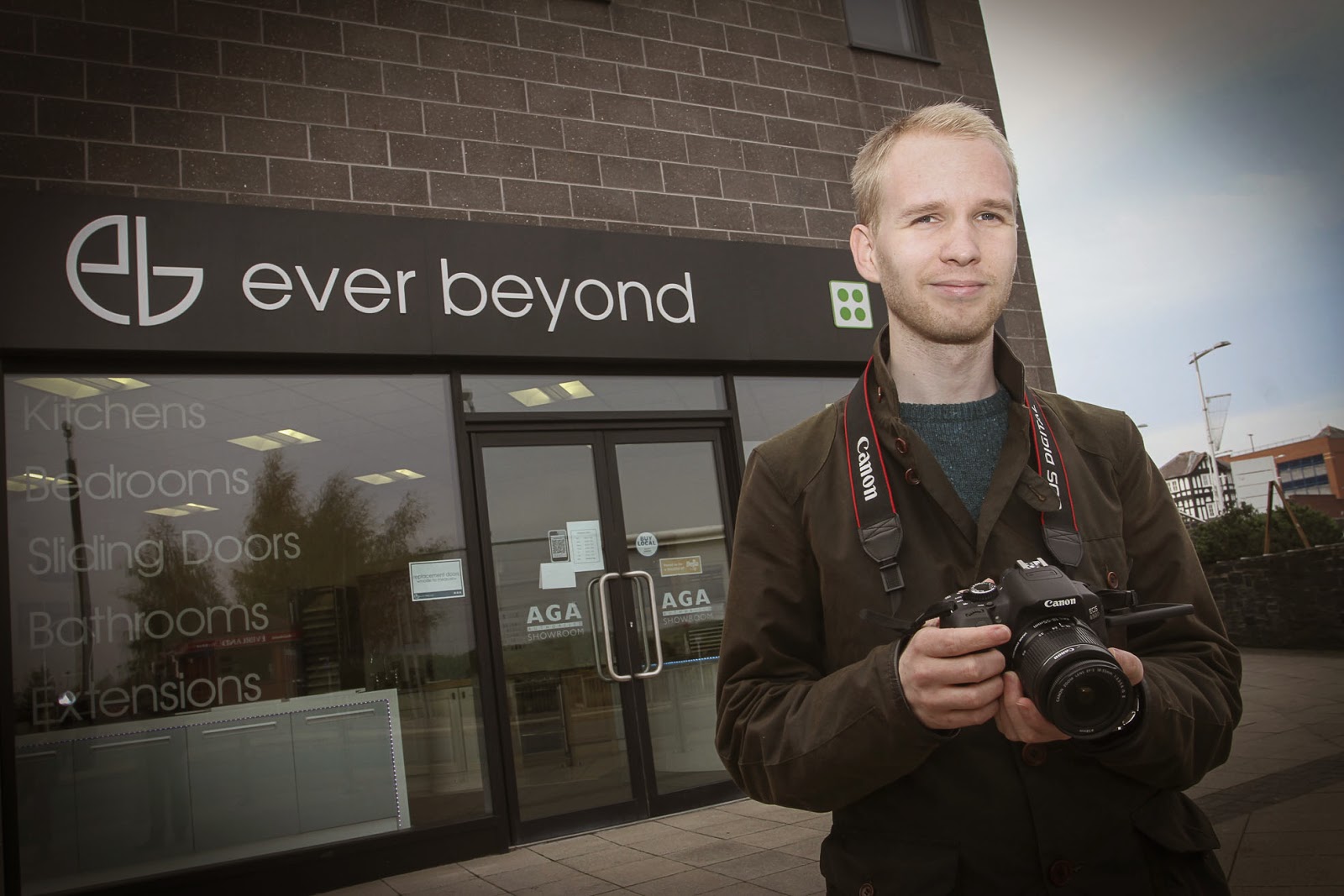 * Film-maker Dan Speirs outside Ever Beyond in Eagles Meadow, Wrexham.
A store manager from Llangollen is set to film a James Bond-style political thriller.
Amateur film maker Dan Speirs, 28, the manager of Ever Beyond, at Eagles Meadow shopping centre, in Wrexham, is planning his shooting schedule for the movie short.
The story, which has the working title of Trajectory, is heavily influenced by James Bond author Ian Fleming, and begins when a mysterious unnamed soldier finds a potential weapon of mass destruction.
The movie will be shot entirely on his DLSR camera and released on Youtube.
Dan, who attended Ysgol Dinas Bran and has a Media Studies degree from Glyndwr University, is also a graphic designer and creates videos for Ever Beyond, which specialises in kitchens, bedrooms and bathrooms.
He said: “The film is very ambitious. It’s easily the hardest thing I’ve ever attempted.
“It’s about a person’s journey. The main character has no name and that’s done on purpose. The reason for that is because it makes it more realistic and gives a fly on the wall feel to it. It will also add a sense of mystery.
“In films generally a lot of things have to be explained. In a real life situation you wouldn’t necessarily find out someone’s name.
“The film is influenced by the likes of Ian Fleming, and going to have a lot of 70s influences too.
“It’s going to be shot across North Wales and Cheshire.
“It’s only going to be a short film, probably about 30 minutes max. I’m going to release it on Youtube.”
Dan has teamed up with his brother Josh Speirs, 25 to create the flick.
Dan said: “We’ll be doing everything, from the filming, to the acting to the editing. Because there are only two of us doing it that presents challenges which we’re going to have to find creative ways to overcome. For example if the two of us are in a scene, the camera will have to be static because there will be no one there to move it. That’s part of the fun of it.
“I really enjoy the crafting of it and creative process. It’s something I’m really passionate about.
“My interest in creating films started when I was still a student. It’s born out of the huge passion for films and how they’re created and a desire to do that myself. I wanted to have a go at making my own.
“I love films by David Fincher like Fight Club, and films by Martin Scorsese. They both have a very distinctive style, and you can tell it’s one of their films just by watching it. They have a particular quality. They inspire me.
“We will be using green screening because we have a green screen at home. If you film someone in front of the green screen you can then replace it with what you want. It’s the same technique they use with weather people on the news. I’ll be editing it using Final Cut software."
He added: “I’ve been doing video editing for about 10 years now and it’s part of my job here. We’re doing more and more of it because we’re putting videos on our website so the customers can see what our kitchens look like.
“I create all our adverts for magazines. Our kitchens are bespoke, so when we create them we tailor them to the customer. We can pretty much make anything the customer wants, from the traditional to the more modern.
“I’ve created show reels that showcase the showrooms.
“It’s a very nice place to work because there’s a really pleasant working environment here.
“We give the type of personal service that you would expect from a local shop.”
Eagles Meadow manager Kevin Critchley added: “I’m a huge James Bond fan and I think this project sounds very exciting. I can wait to see it when it’s finished.”
Posted by llanblogger at 7:00 AM