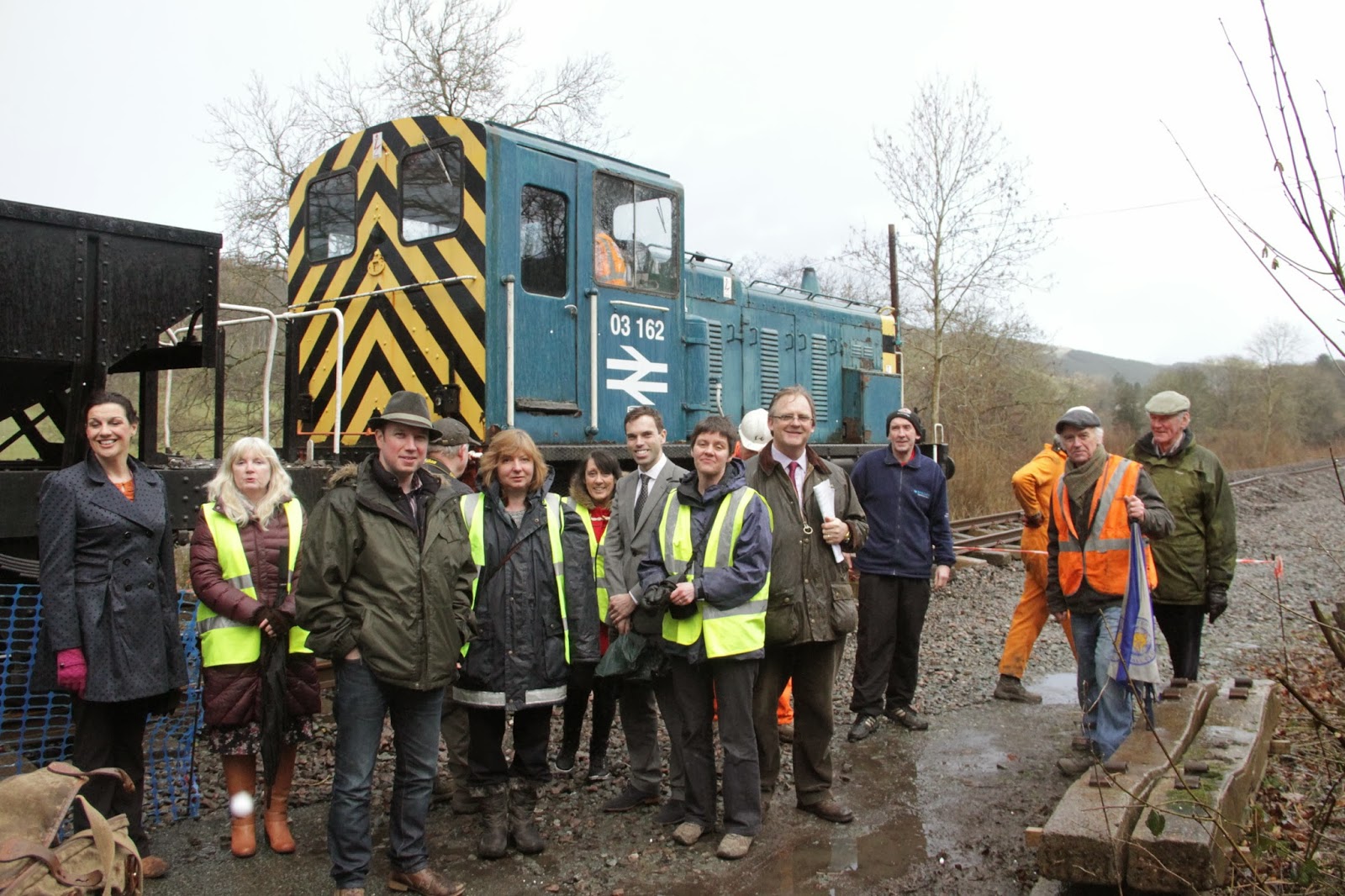 * The AMs and others at Bonwm with the engineers' train alongside. 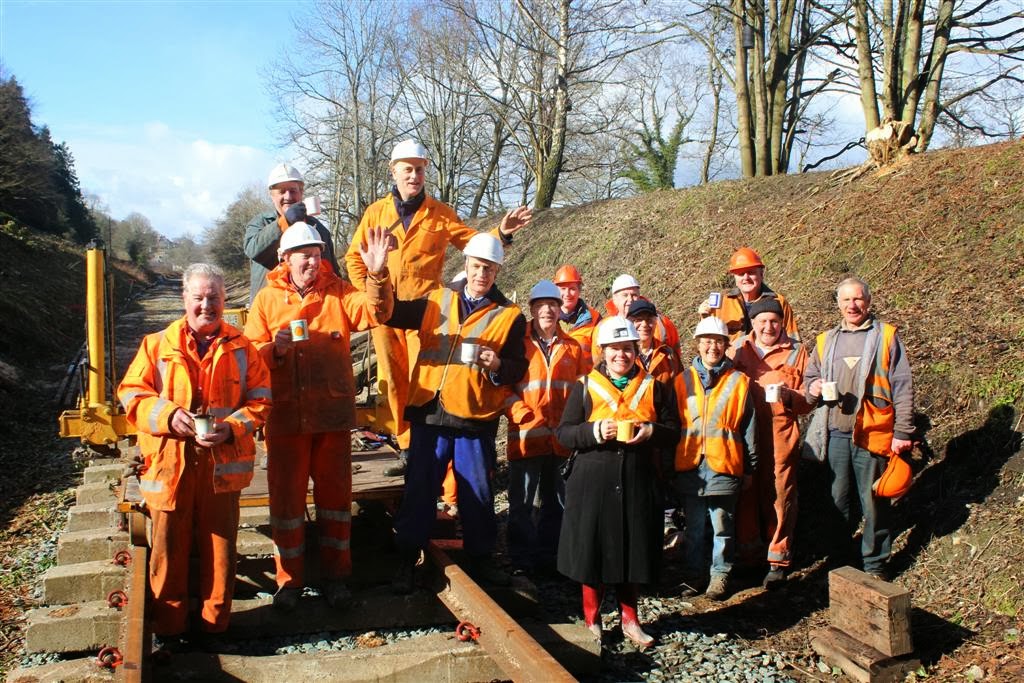 * Susan Elan Jones MP with the volunteers near bridge 28A. 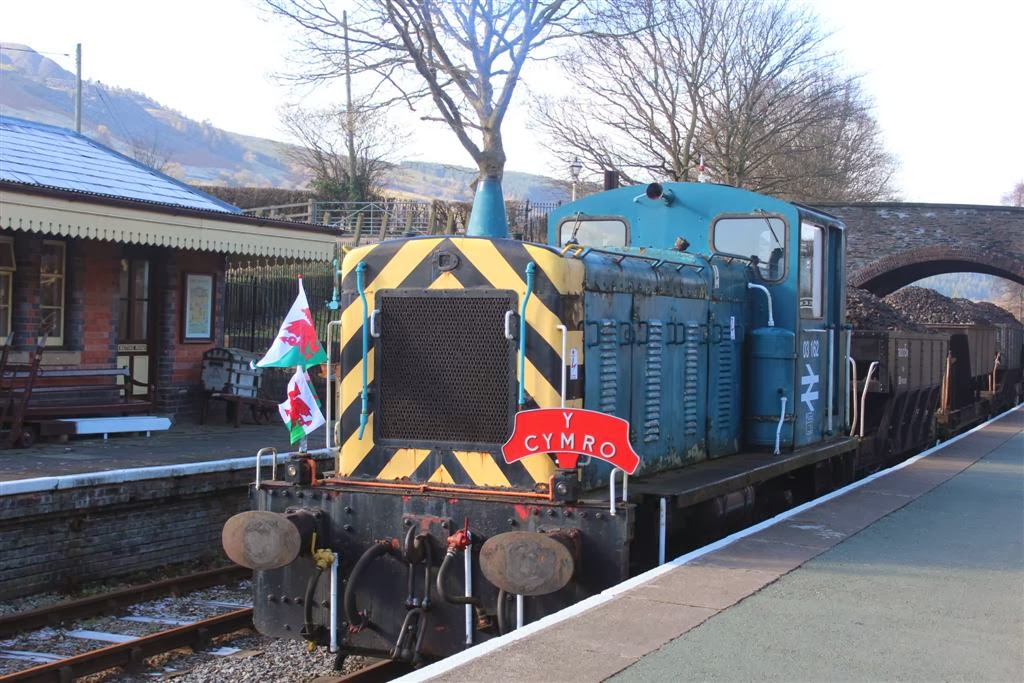 * The decorated class 03 locomotive with the ballast train at Carrog.

Over the course of the past week a series of VIP guests has visited Llangollen Railway to see progress of the track extension to Corwen.
Last Thursday, a group including Clwyd South AM Ken Skates, North Wales AM Mark Isherwood, Plaid Cyrmu candidate Mabon ap Gwynfor and officers from Denbighshire County Council took a tour of inspection from Corwen.
In the inclement weather use was made of the Corwen Community bus to take the party along the A5 road where they could see the work completed on the station site with the footings in place, the repaired over bridge 28A by Plas Derwen and the new track laid through to the site of the former Bonwm halt.
Here they received a briefing about progress and the future potential for riverside erosion unless some remedial action is taken.
After a return to Corwen the site engineer for the contractors McPhilip's reviewed progress with the Corwen Flood Alleviation Scheme which has impacted on the railway embankment at the site where the phase 1 station is to be built.
All expressed themselves very satisfied with the progress of the railway to date and the prospects for opening through to Corwen later this summer, on a date still to be advised.
On Saturday - St David's Day - the railway played host to Clwyd South MP Susan Elan Jones who was given escorted access to the track bed and met volunteers at the rail head.
She later saw a ballast train operate on the section of new track. For this occasion the diesel shunter locomotive carried appropriate decoration with Welsh flags and the Welsh train headboard "Y Cymro" (The Welshman).

Ms Jones said: "I was delighted to visit the railway extension works and meet some of the volunteers who are tackling this project.
"The achievement to date is tremendous and I am sure they will achieve their dream of having a train at the new station in Corwen later this summer."
Posted by llanblogger at 7:10 AM