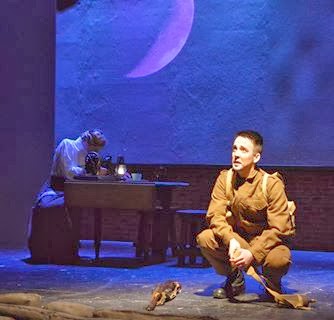 * Ally Goodman is a scene from The Accrington Pals.

In the patriotic fervour that immediately followed the outbreak of World War One, exactly a century ago this year, large groups of young men from the same towns, workplaces or youth organisations rushed to sign up for service on the Western Front.

They became part of what was known as Kitchener’s Army after the Secretary of State for War who had launched the massive recruiting drive and were dubbed “pals battalions”.
One such unit was the Accrington Pals, a bunch of hearty lads from the Lancashire mill town, officially known as the 11th Battalion of the East Lancashire Regiment.

But the tragedy of having large groups from the same area joining the ranks together was that when the guns began to fire they died together, and in horrendous numbers which decimated their home towns.

On the blood-soaked first day of the Battle of the Somme in July, 1916 the Accrington Pals attacked the German front line at Serre 700 strong but within just half and hour 235 of them lay dead and 350 wounded.

One of the survivors recalled: "We were able to see our comrades move forward in an attempt to cross No Man’s Land only to be mown down like meadow grass. I felt sick at the sight of the carnage and remember weeping."

Back home a rumour that spread around Accrington that only seven men had survived from the battalion and an angry crowd surrounded the mayor's house, demanding information.


This bitter tale of love and loss is retold in Peter Whelan’s 1982 play, The Accrington Pals, which is being performed by Llangollen Twenty Club at the Town Hall this week to mark the World War One centenary.
This powerful production, which has the last of three performances tonight (Saturday), vividly contrasts the pals’ life and experiences at the front with those of the women they left behind to keep the home fires burning in Accrington.

The story revolves around balsy market stall holder May Hassall, her young cousin Tom, for whom she has an unrequieted passion, and their friends Eva and Ralph.


The performance provided by Anna Turner as May just doesn’t come any finer. Everything from her Lancashire accent to her gut-wrenching anxiety at the thought of young Tom going off to war is quite simply brilliant.
Tom – much more of an artist than a fighter - is played to perfection by Andy Evans, one of the many young men whose futures affected by the conflict.

An equally strong portrayal of Ralph, their jack-the-lad friend, comes from Twenty Club stalwart Ally Goodman and the part of Eva, his girlfriend, is played with feeling by Natalie Evans.

As is usual with the Twenty Club, the key players receive strong backing from those in the supporting roles.

Despite its tragic theme, the piece has plenty of lighter moments and there to deliver her fair share of laugh-lines is Hannah Brockley as Sarah, a mill worker who is a friend of May and Eva.

A nice piece of casting is Andrew Sully as another of the pals, Arthur. He’s a bit of a religious type so it helps that Andrew is the local vicar.

To keep it in the family there’s a nice little cameo from Carys Stallard – Andrew’s real-life daughter – as Bertha the millgirl who becomes a wartime bus clippie.

Liz Evans turns in a neat performance as Annie, a housewife greatly affected by her husband going off to the trenches, and Joe Maddocks makes a useful Twenty Club debut as Reggie, the boisterous son of Annie and Arthur.

David Connolly gives a strong interpretation of Company Sergeant Major Rivers, the old soldier who gives a guarantee to May that he will look after Tom in the hell of the trenches.

The show, a marvellous evocation of the era and its cannon fodder heroes, is a credit to director Rachel Morris and the entire team - both in front of and behind the scenes - who deserve campaign medals for their brave efforts.

If you’re lucky you’ll get a ticket for tonight’s performance.
Posted by llanblogger at 7:28 AM