Fire on hillside above the town 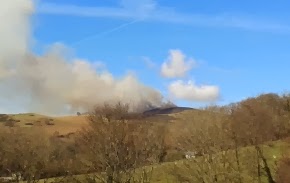 llanblogger took this picture of what appeared to be a large gorse fire on the hillside just west of the town earlier this afternoon (Monday).

The large plume of smoke drifting away rom the blaze eventually died down later in the afternoon.

Llangollen Fire Station has since confirmed this is controlled burning until 6.30pm today.

At 17:07 Our two appliance's were called to a mountain fire in the Llantysilio. Chirk and Wrexham 1st also assigned. Hrjx3 and beaters used.
Posted by llanblogger at 1:47 PM