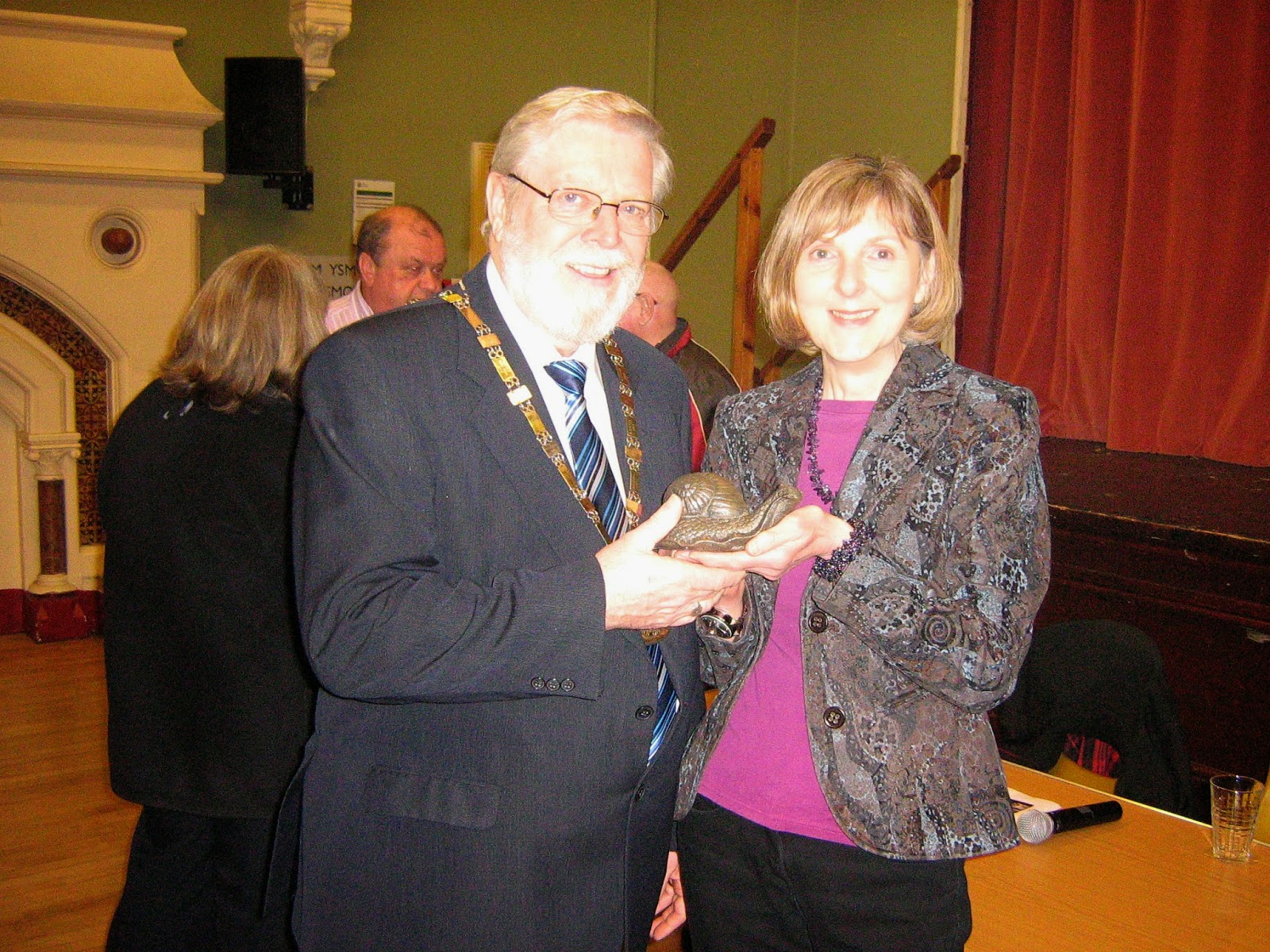 * Andrew Mearns presents the mayor, Cllr Bob Lube, with the lead snail,
emblem of the Cittaslow movement of which Llangollen is now part.
The Mayor of Llangollen, Cllr Bob Lube, gave a round-up of the work of the Town Council to an audience of around 30 residents who turned up for the annual town meeting at the Town Hall yesterday (Thursday) evening.


Cllr Lube began by saying it had been a “varied and interesting” year.
One of the major changes to affect the council had been the resignation of Cllr Tim Palmer ahead of his move abroad with his family. This had created a vacancy which was advertised to the local community.


Cllr Lube described how only two residents had put themselves forward to fill it but one of them, Lynda Slater, was eventually elected to the position.
Another change to the operation of council business during the year had been giving members of the public the chance to speak briefly on topics of interest to them in a 15-minute period set aside at the start of monthly council meetings. Local county councillors were also now invited to meetings to brief town councillors on local matters of concern.


The mayor explained how the council had powers to make comments and observations on planning matters going before the county council. However, he added: “Our recommendations are not always accepted by the county council.”
He went on to welcome a number of new businesses which had opened in the town over the past year, mentioning specifically the Edinburgh Woollen Mill in Castle Street and Fizzywigs sweet shop in Oak Street.


His next topic was the Town Hall, which he said “continues to attract more people and revenue” for the Town Council which owns and runs the building on behalf of the community. Minor changes were currently being made to the gents’ toilets on the upper floor, he added.
Cllr Lube explained how the council was still committed to the CCTV system sited in the town centre although he did describe this as “an expensive hobby” which needs continual maintenance and upgrading.


“We intend to continue with it because we believe it has a deterrent effect,” he pointed out.
The participatory budgeting scheme, in which local organisations are awarded small amounts of cash towards their running costs and development, had again been a success with all projects put forward this year obtaining funding.


The mayor reported that Llangollen had been successful in becoming designated as a Cittaslow town, an international movement which allows a community to grow in a thoughtful and sustainable way.
This, he said, this would bring plenty of challenges and opportunities for the town.


Cllr Lube said the council was still looking to refurbish the Chain Bridge in partnership with Llantysilio Community Council.
During the year, he said, there had been a setback to the scheme when all eight of the tenders put out by the council to specialist companies to undertake the work had come back with estimates there were above the budget.


He explained the council was now going back out to tender to different companies.
Some good news with the project, he said, was that the Town Clerk had managed to secure extra funding of £78,000 within the past couple of weeks.


On another subject, the mayor said that among the council’s responsibilities was the maintenance of a number of gardens, hanging baskets and planters in the town centre.
A partnership arrangement with Derwen College in Gobowen had meant that students had planted a number of floral displays in the area last summer and Cllr Lube said the council was looking forward to making further arrangements of this type with the college.


Cllr Lube had praise for the volunteers of the Tidy Town Team which maintains a number of grassed areas and open spaces in the area. He described the work is does as “very impressive”.
The Town Council, he said, was continuing with its support for the Shop Front Scheme, a countywide project to award grants to businesses to upgrade the frontages of their premises.


The annual Remembrance Day ceremony, organised by the council with the help of other local organisations, had once again reflected well on the community, said Cllr Lube who added that the High Sherriff had been very impressed with the area’s community spirit.
The Town Council, he explained, had continued with its support for events such as the Food Festival, the Christmas Festival and the Eisteddfod which all “add to the cultural tapestry” of the town as well as contributing to its economic success.


Turning to council finances, the mayor said that financial constraints meant that keeping to the budget over the next year would be a priority.
For the year ahead it had been necessary to increase the precept – the portion of the council tax bill which goes to pay for the Town Council – by 3.65%.


The mayor said: “We accept that this is above inflation but only marginally so.”
He added the town council was also well of the financial cuts which the county council would be facing.


Turning to the controversial subject of the town’s Christmas lights, he said that although these represented a “significant investment” for the council, there had been an approach by a group of residents keen to see the lights enhanced.
He explained: “We have therefore agreed to purchase our existing lights from the company from which we have had the lights on lease and add to these with those purchased from the group who contacted us.”


Summing up, the mayor said: “We have and will continue to listen to the comments of local residents. There are a lot of opportunities for groups to get involved.”
He said he had enjoyed his year in office and was very proud to be the town’s mayor.


The floor was then thrown open to questions from residents in the audience.
One person asked how far short the £78,000 recently acquired by the Town Clerk left the council of the total amount needed to finance the Chain Bridge facelift.


The mayor replied: “We have another chance to go back in June for more money from the Lottery. However, this is a very difficult site. It is a conservation area and a tightly regulated stretch of waterway, although I’m hoping we’ll get there in the end and I’m sure we will.”
He added that the gap in the Chain Bridge budget was now between £20,000 and £30,000 which, he said, could be bridged with the help of the Lottery.


Another resident said the road to the cemetery off Abbey Road was a disgrace and asked what the Town Council could do about it.
The mayor replied that approaches had been made to people with land nearby, including the church and the railway, and none had been revealed as responsible for the road.


However, he said the county council would now be asked for its assistance in tracking down whoever was responsible for making necessary repairs.
After a number of other questions were taken and answered, the meeting ended.


Cllr Sheena Burrell then gave a presentation on the benefits of Cittaslow membership to the town. This was followed by a similar presentation from Andrea Mearns, a member of the Cittaslow group in Mold and a member of the national Cittaslow board.
In Mold’s case, she said, among the many benefits had been the winning of grants totalling £73,000 towards various projects over the past year.


It was then explained by Cllr Phil Thane, who led Llangollen’s successful Cittaslow bid group, that, with its work now done, the group had been disbanded and a new committee was being set up to steer things forward from now on.
A call for at least 10 volunteers to become committee members was only partially heeded when half that number of people in the audience put their names forward.


The mayor said there would be further calls made for members at a later date.

At the end of the evening Andrea Mearns presented the mayor with a lead snail, representing the "slow" emblem of Cittaslow.
Posted by llanblogger at 9:00 AM