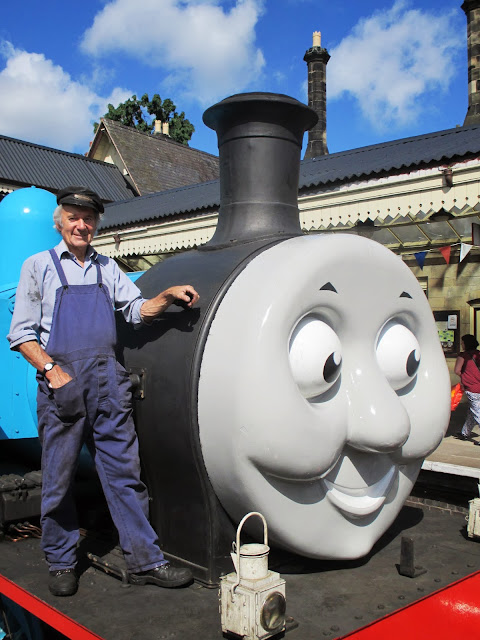 * Owner Mike Pearce with Thomas the Tank engine at Llangollen
during the event held in August.


After a very successful series of Days Out With Thomas at Llangollen during August the star of the show has gone off on a continental working holiday.
Taking the ferry for Hook of Holland the Llangollen-based Thomas the Tank Engine has made another appearance at the heritage Museum Buurt Sporwegen  at Haarksbergen near Enschede in the Netherlands.
This was a repeat visit by popular request of the Dutch rail enthusiasts who operate the preservation scheme.
The famous blue engine No.1 continues on its way into Belgium where it has an appointment for a first appearance at the heritage railway centre at Stoon Centrum Maldegem, near Bruges during the weekend 7/8 September.
Later it will head off for a heritage railway in the Ardennes.
Mike Pearce, the owner of the Llangollen based Thomas, said: "These visits to Europe confirm the international appeal of the Thomas the Tank Engine stories as now promoted on the worldwide scene by HiT Entertainment.
"Combining three visits with one return ferry movement eases the costs for the railways hosting the events and we hope they are a big crowd puller for the Belgian children who will never have seen Thomas for real before.
"The appearance of the engine from Llangollen is also a big promotion for the town in North Wales.
"Our fans of Thomas at Llangollen need not worry however because Thomas will be back at Llangollen for the next series of Days Out with Thomas due at half term in October."
Meanwhile, Llangollen Railway is getting ready for its own three day steam gala this weekend, (30/31 August & 1 September) when the visiting engine will be No.7812 Erlestoke Manor, on hire briefly from the Severn Valley Railway.
The visitor will star alongside the railway's own flagship engine No.7822 Foxcote Manor and three other engines from the home fleet.
George Jones for Llangollen Railway said: "Once again the railway will be putting on a major steam event for rail fans and others as an intensive service is offered between Llangollen and Carrog.
"A near 45 minute interval service will operate starting from Llangollen at 10.00am and will feature Great Western freight locomotive No.3802, the Black Five 44806 and British Railways standard tank No.80072 for a recreation of the great days of steam.
"The first train of the day will feature both Manor locomotives when they are scheduled to double head the 10.00am departure.  Such a pairing was once appropriate for a Royal Train visit."
Posted by llanblogger at 7:45 AM