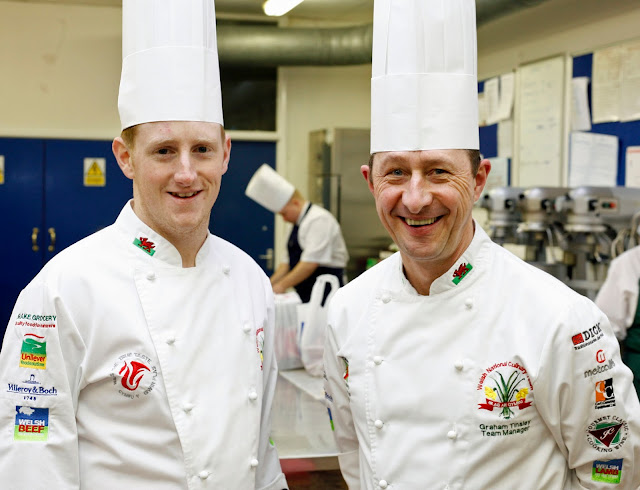 * Graham and Dion.
One of world's most talented young chefs will have a starring role at a top food festival, it's been revealed.
Rising star Dion Jones, 25, will be hitting the culinary high notes at  Hamper Llangollen that's being held in the town on Saturday and Sunday, October 19 and 20.
Last year Dion, from Valley, Anglesey, and now living in Wrexham, became the first Briton beat rivals from around the globe to win the world’s oldest culinary competition, the International Escoffier Challenge in the South of France.
At Hamper Llangollen, now recognised as one of the UK's top 10 food festivals, Dion will be cooking up a Welsh feast with TV chef Graham Tinsley and Harri Williams. 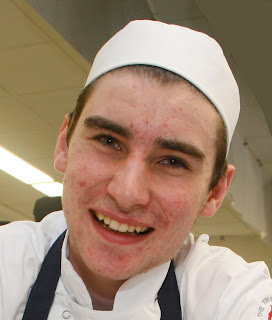 * Harri.
The three chefs, who all compete for Wales in the Welsh National Culinary Team, will take over the main Pavilion kitchen throughout the Sunday for six demonstrations.
Dion hit the headlines again after he emerged in second place in one of the UK’s toughest-ever cooking competitions – the Roux Scholarship - judged by a host of celebrity chefs.
The competition reduced to 18 semi-finalists and just six finalists in 10 one hour-long episodes screened on the Watch TV channel.
Young chefs had to compete under pressure for the Godfathers of modern cuisine, the Roux family – brothers Michel and Albert and their equally legendary sons Alain and Michel Jnr.
As if that was not testing enough, the judging panel contained a stellar list of celebrity chef names, including Rick Stein, Angela Hartnett, James Martin, Raymond Blanc and Andrew Fairlie – the first ever winner of the Roux Scholarship.
“I came second overall in the competition which ran for 10 episodes,” said Dion. “I won various cash prizes and knives but it was the taking part which was the important thing.
“I was told it was ‘very close’ between myself and the guy who won, Paul O’Neal. Taking part in this has to rank alongside the International Escoffier win.
“The series was filmed in the Roux’ famous Le Gavroche and Waterside Inn restaurants and in Switzerland.”
After working at Grosvenor Pulford Hotel and Spa and De Vere Carden Park, Dion now works for Simon Rimmer at his Earle restaurant in Hale, commuting from his home in Tanyfron near Wrexham.
Dion says his mother Ann “pushed” him towards cookery and persuaded him to go to Coleg Menai. After that he never looked back. He too was a captain for the Welsh Junior National Culinary team and now competes in the senior team under team manager – and former boss Graham Tinsley.
This year's festival is being supported by the rural development agency, Cadwyn Clwyd.
Cadwyn Clwyd’s contribution came via the Rural Development Fund for Wales 2007-2013, which is funded by the European Agricultural Fund for Rural Development (EAFRD) and the Welsh Government
Welsh speaker Harri Williams, from Conwy, a chef at the award-winning Ellenborough Park Country House Hotel in Cheltenham, has just returned from Hong Kong.
“I was there for a week promoting Welsh produce for the Welsh Government,” said Harri, 21.
“We were taking part in a big show the idea of which was to find distributors for Welsh products and I was cooking Welsh produce for people to taste. It was a brilliant trip.”
Harri is captain of the Welsh Junior National Culinary, and led them to a silver medal at the Culinary Olympics last October in Germany.
He’s also been to No 10 Downing Street with his former boss Graham to cook for Prime Minster David Cameron at a star-studded get together on St David’s Day for a host of Welsh celebrities and sports stars.
His interest in cooking comes from his mum, Rhian Williams, co-founder and owner of the hugely successful Llanrwst-based bakery Siwgwr a Sbeis – a regular at the Llangollen Festival.
“I started working for Graham Tinsley when I was 15, first at the Castle Hotel in Conwy and then I moved with him to De Vere Carden Park Hotel and Spa in Cheshire,” said Harri, a De Vere Junior Chef of the Year. He started working at Cheltenham at the beginning of March but travels home to North Wales regularly.
Graham, executive chef at De Vere Carden Park and director of the Castle Hotel at Conwy, has taken the Welsh culinary team as high as seventh in the world rankings.
He said: “I must have been to Llangollen now about eight or nine times. It’s still a really good festival, and one of the friendly ones. I go to a lot of festivals which are ‘man-made’where tents and marquees are brought in. But at Llangollen you have the Pavilion and the great surroundings; it’s such an eye-catching place.”
Adopted Welshman Graham has enjoyed a distinguished career which has taken him to some of top hotels in the UK and Europe including working for Anton Mosimann at the prestigious Dorchester Hotel in London.
In 1991, Graham was head hunted to help develop and open the first four star hotel in North Wales - St David's Park Hotel in Ewloe. The hotel was such an overwhelming success that, in 1997, he was appointed to the team that developed and opened the renowned Carden Park Hotel, Spa and Golf Resort in Cheshire.
He was awarded an MBE in the Queen’s 80th birthday celebrations in 2006 for his services to the food industry.
He has cooked for the Queen and members of the Royal family on numerous occasions, as well as the Emperor of Japan and European Heads of State at Cardiff Castle. Prince Charles, as patron of the Welsh National Culinary Team, has requested that they cook for him and his guests at every formal occasion in Wales and Graham was invited to attend his wedding celebration at Windsor Castle.
Robert Price, Cadwyn Clwyd's agri-food project officer, said: "We are so lucky that North Wales is a hotbed of culinary talent and I am sure that Graham, Dion and Harri will put on a great show at this year's festival.
"In addition to many favourites, we have lots of new food producers wanting to come this year.
"The location of the Pavilion is absolutely  spectacular - I can't imagine that any other food festival in the UK has a more beautiful setting.
"It's also brilliant news for the local economy. If you buy from a local producer, all that money is recycled through the local economy and that sustains employment in our rural areas."
For more information about Hamper Llangollen 2013 go to: www.llangollenfoodfestival.com
Posted by llanblogger at 7:11 AM