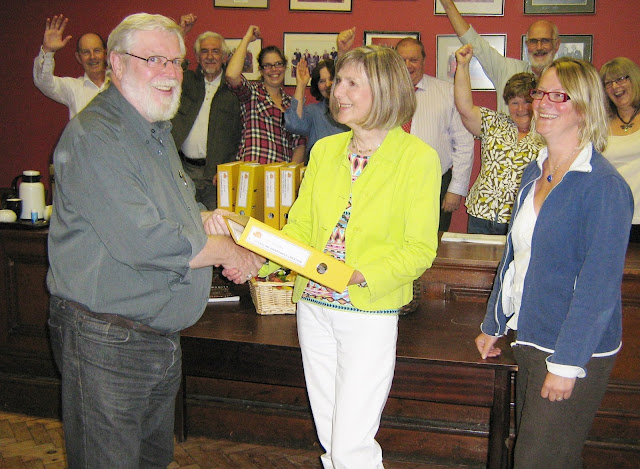 
The town’s year-long bid to become part of the international Cittaslow movement, which fosters economic, social and environmental sustainability, was rewarded this week when it was formally granted accreditation by the organisation.


Bosses of the Denbighshire tourist mecca say this will now bring a range of benefits, including reassuring potential visitors and investors that it is well run and progressive, and unlocking funds from central government and the EU to help finance local initiatives.


Llangollen has become only the second Cittaslow town in Wales after Mold, and is only the sixth in the UK.


Mold is said to have benefited enormously from holding the status.

Cittaslow grew from the Slow Food Movement, another international scheme which links the pleasure of food with a commitment to community and the environment by promoting local, seasonal produce and reconnecting people with where their food comes from.


The name Cittaslow is derived from the Italian word for city or town and is pronounced almost like 'cheetah'. Slow is English.


Under the umbrella of the town council, Llangollen set up a working group dedicated to winning Cittaslow status.


The group’s 14 members, including councillors and non-councillors, have spent the past year putting together a formal bid package which demonstrated every aspect of the town’s suitability for accreditation, including the strength of its local produce and products and its hospitality and community assets.


The bid was showcased by group members to two Cittaslow representatives from Mold during a presentation held in the town hall on Wednesday evening.


At the end of it, Mold town councillor Andrea Mearns told them: “This is a very sound application and we’ll be recommending you are accepted as a Cittaslow town.


“You have done very well and have produced a good body of evidence to support your application. You will be welcomed into the Cittaslow network.”


She went on to explain that each of the UK’s six Cittaslow towns has a place on the national board which is one of 23 representing countries across the world.


Businesses in Llangollen will now be entitled to carry the official Cittaslow logo on their websites and Llangollen Town Council is investigating the possibility of flying a Cittaslow flag over the town hall.


Members of the bid group are currently working on plans to spread the word locally about the benefits Cittaslow membership.


Spokesman and town councillor Phil Thane said: “We are delighted to have won accreditation  which is a tribute to the hard work put in by the bid group and of our town clerk Gareth Thomas.


“There are two major reasons for becoming a Cittaslow town.


“Firstly, it provides a set of well recognised goals that serve to keep the town council and Denbighshire County Council up to scratch.


“Also, when the council or a voluntary body in Llangollen applies for a grant from Cardiff, London or Brussels being a Cittaslow town shows that we are well organised and run and should help us bring more investment into the town.


“One of our main aims is to involve as many people as possible in Cittaslow Llangollen, which is why we've set up a website to show you what we're doing at www.cittaslow.llangollentowncouncil.co.uk. We are also on Facebook and Twitter.”

* llanblogger is proud to have been part of the successful bid group.


Llyr Gruffydd, North Wales regional AM for Plaid Cymru, said: “I’m delighted that Llangollen has joined Mold as one of the Cittaslow towns – a third of all the UK’s Cittaslow towns are in North Wales [2 out of 6].
“Mold has worked hard to gain a reputation as a food town and I’m sure this new status will also help Llangollen’s food producers and outlets to benefit. We should be justifiably proud that our food and drink is of such high quality. The challenge now is to create the outlets for those products to be sold throughout the region.”
Posted by llanblogger at 9:57 AM