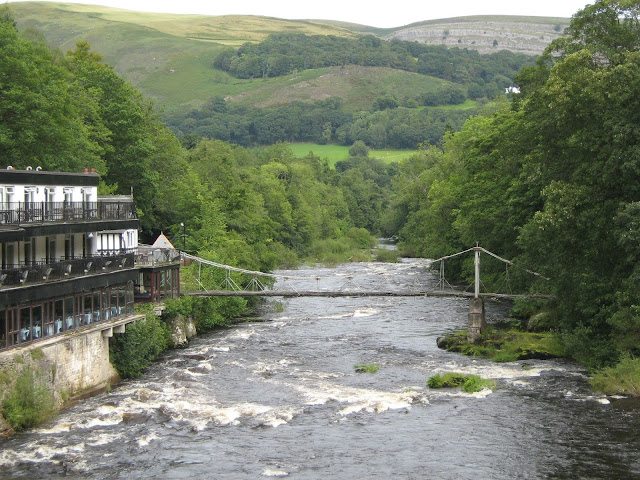 * Final funding for the restoration of the Chain Bridge is now in place.

THE last financial link of the ambitious project to bring Llangollen’s world famous Chain Bridge back to life has now been put into place.

Welsh conservation body Cadwyn Clwyd has just approved a £20,000 grant for the scheme, which means restoration work can now go ahead with the aim of having it re-opened to the public early next year.
Largest slice of the funding for the project, which undertaken jointly by Llangollen Town Council and Llantysilio Community Council, was approved in early July when the Heritage Lottery Fund approved a grant of £350,000.
Following news yesterday (Wednesday) that the Cadwyn Clwyd application for the final tranche of cash to start facelift work had been give the thumbs up, Llangollen’s mayor, Cllr Bob Lube, said: “I am delighted with the award from Cadwyn Clwyd.
“This means that the project is now fully funded and both Llangollen Town Council and Llantysilio Community Council can now press ahead with the practical work of restoring the Chain Bridge.”

Gareth Thomas, Llangollen’s town clerk, said: “This final grant award means that phase two of the project can now start in earnest, and meetings are planned with the Heritage Lottery Fund, Cadwyn Clwyd, Denbighshire County Council and Ramboll, the consulting engineers, to move the project forward.
“There is still a lot of work to do, but these are exciting times for the project.”

The bridge, which spans the fast-flowing River Dee just outside Llangollen, has been closed to the public for safety reasons since the 1980s.
The two councils bought the run-down structure from its previous owner, businesswoman Stephanie Booth who also ran the adjacent Chain Bridge Hotel, in 2007 and have since been working to secure the funding necessary to see it repaired and returned to its former glory as a major tourist attraction.


First injection of cash came a few years later when the HLF made a grant of £28,900 to pay for the preparation of a detailed report on how the bridge could be restored.


The project took another step forward this June when it landed a grant of £50,000 from WREN, a not-for-profit business which awards cash to community, environmental and heritage projects.


The plan is to fix the bridge and create disabled access via nearby Berwyn Station along with an exhibition and other community events.


The HLF grant bid included working with community groups such as local schools and history groups, including Llangollen Museum.


One of the aims is to see tourists travelling along Llangollen Canal via horse-drawn boats and then crossing the bridge to take a steam train ride back into Llangollen.


The original bridge was built around 1817 by Exuperius Pickering, a local entrepreneur dealing in coal, limestone, slate and iron bar, who is reputed to have called on engineer Thomas Telford to help with the design and construction.


The new bridge allowed Pickering to monopolise the local coal trade as it gave him access to the adjacent London to Holyhead road - the A5.


It also meant he avoided paying tolls to cross the main bridge over the river in Llangollen.


In 1876 the bridge was replaced by Sir Henry Robertson, a part owner of Wrexham's former Brymbo Ironworks.


In 1928, freak flooding washed away most of the bridge and it rebuilt in a style similar to Anglesey's Menai Suspension Bridge.


It was closed in the mid-1980s due to concerns over its safety.
Posted by llanblogger at 7:17 AM