Motorists who risk live by speeding will be targeted by North Wales Police as part of a week-long campaign.
The crackdown on speeding motorists is set to take place throughout Europe this week as part of the European-wide initiative to crack down on speeding motorists - starting today, Monday, August 19th until Sunday August 25th.
The TISPOL (European Traffic Police Network) campaign will see all police forces across Europe tackling speeding by conducting random speed checks. 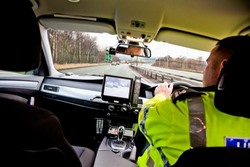 North Wales Police Roads Policing Officers along with Go Safe will be combining their efforts to deter and detect motorists who choose to ignore the speed limits. Drivers who are caught speeding will be issued with anything from a Fixed Penalty Ticket to a summons to attend court.
The warning is issued on the day the announcement has been made that the cost of a fixed penalty notice for speeding has increased from £60 to £100.


Roads Policing Temporary Sergeant Mark Jones said: “Speeding is an issue that concerns many residents and one that we take extremely seriously.
“North Wales Police has a robust strategy around enforcing the ‘Fatal 5’ offences which are speeding, failing to wear a seat belt, drink and drug driving, dangerous and careless driving including unnecessary risk taking and using a mobile phone while driving.

“We are committed to assisting in reducing casualties on the road through the use of targeted enforcement operations around high risk groups of people and locations while enforcing the ‘Fatal 5’ offences.

“The risk of being seriously injured or killed rises dramatically if a decision is taken to commit a ‘Fatal 5’ offence and I want people to be aware of the devastating affect it can have and make a conscious decision not to take any chances.”
He added: “There is no doubt that this campaign will have a positive impact on road safety in North Wales and those who choose to ignore the speed limits can expect to be prosecuted for their actions.”
Further information regarding the increase in fines is available via the Department for Transport website
.
Posted by llanblogger at 7:14 AM