Hairy Bikers roar in to film at railway 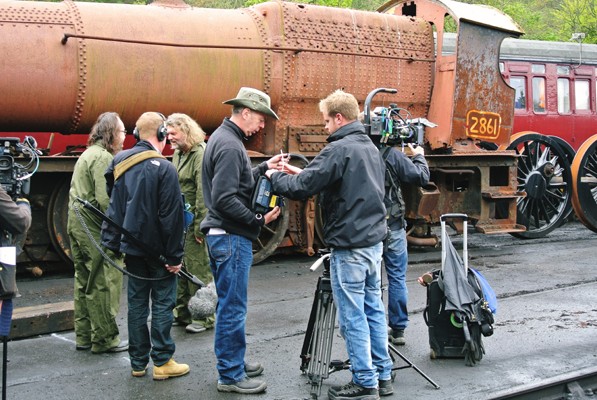 The forthcoming third episode of the popular Hairy Bikers series exploring heritage restoration projects is due to feature the duo's visit to Llangollen Railway.

Si King and Dave Myers came to Llangollen in the spring to help with a new locomotive project which aims to rebuild an example of an extinct Great Western express freight engine known as the ‘Night Owl’.

The project is being promoted by the Great Western Society at Didcot Railway Centre, Oxfordshire and the assembly work is being undertaken by Llangollen Railway’s engineering department.

The project benefits from the fact that Great Western engines had many features in common and, by dismantling three derelict, ex-scrapyard locomotives which are surplus to requirements many of the parts needed for the rebuild have become available for incorporation into new framework.

The dismantling of the engines took place at Llangollen and during their visit the bikers assisted with the acquisition of parts from Great Western No.2861, a former heavy freight locomotive.

However, the major items missing from the list of components were two main driving wheels.

At 5ft 8 inches in diameter these had to be specially cast and the programme will feature the two presenters visiting the foundry where the wheels were specially made for delivery and, later, their assembly at Llangollen.

Project Engineering Manager, Paul Carpenter, said. “The programme will show what tremendous skills and abilities are available within the engineering team at Llangollen Railway.

"The two presenters fully involved themselves with the work process during their visit which made a big impression on everyone involved. Their down to earth commentary on the tasks undertaken will make the processes comprehensible to viewers, as well as providing some light hearted entertainment.

“The successful completion of this project will produce a Great Western type of express freight locomotive which had otherwise been lost to preservation and it has been given No.4709 as the follow-on number in the Great Western series.”

George Jones, for Llangollen Railway, said: “The Night Owls, as they were nicknamed, were a batch of just nine large locomotives which mainly operated fast freights to London during the night.

"Locally the type is well remembered by rail fans for their appearance through Wrexham in the late
evening on the freight trains from Birkenhead conveying livestock to the markets at Smithfield in London, until that traffic ceased during the early 1960s.

“The trailer for next week’s episode showed the two presenters riding on the footplate of locomotive No.3802 at Llangollen and enjoying a hearty breakfast cooked in the traditional way - on the shovel heated in the engine’s firebox.”

Further details about the forthcoming episode will be found on the BBC2 website.
Posted by llanblogger at 8:06 AM