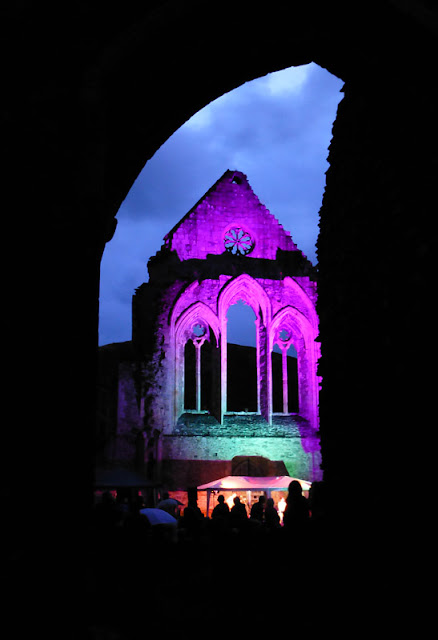 This  year’s Llangollen Fringe Festival saw another increase in audience figures, according to organisers.
The 16th Fringe ended last Sunday evening with a soggy finale concert at a rain-soaked Valle Crucis Abbey.


But the thundery weather failed to dampen the enthusiasm of the 300 or so people who turned out to see it.
Festival spokesman Graham Timms said: “The Fringe closed on Sunday after 11 days of concerts and events throughout the town.
“As usual a huge range of events were included in the programme.
“Where else could you see former Poet Laureate Andrew Motion one night and then r 'n' b infused punk band The Blockheads another?
“Audiences were up again in general - most events being almost sold out - meaning that the Fringe survives into another year.“
He added: “We decided to go ahead with the Valle Crucis concert after an agonising decision made first thing on Sunday morning.
“Yet at 7.20pm we thought that we'd made a wrong call as a thunderstorm went directly overhead.
“Although the rain bounced down for about 10 minutes, by the starting time, the rain stopped and the music began.


“The magical setting in the abbey was enhanced by the menacing clouds overhead.
“Around 300 people attended and were rewarded by a superb evening hosted by the appropriately named local performance poet Rain Dei.
“I’d like to say thanks to the local community for all the tremendous support and goodwill it gives to the festival.”
Posted by llanblogger at 8:08 AM