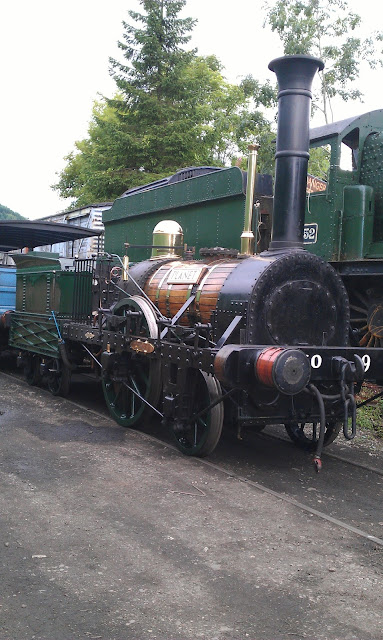 * The replica of the locomotive Planet is
visiting Llangollen Railway for a filming session.
Llangollen railway has been turning back the clock to the early days of steam.
The  locomotive Planet and two vintage passenger coaches has arrived at Llangollen for a filming session.
The replica Planet normally resides at the Manchester Museum of Science & Industry.
It is a modern version of a locomotive design used on the original Liverpool & Manchester Railway, opened 1830, and was built in 1992.
Quite apart from other details of its small design and appearance the tall chimney gives it away as a very early steam locomotive.
The engine, tender and two vintage coaches are at Llangollen for a brief filming session on the railway which will be used in a feature about the English artist Turner.
George Jones, press officer at Llangollen Railway, said: "It is wonderful to be able to host a visit by Planet which is a remarkable recreation of an early locomotive.
"It follows earlier appearances, in 2002, of the other L&MR replicas - Rocket, San Pareil and Novelty - which came to take part in a recreation of the Rainhill Trials of 1829 based around the station area at Carrog."
See picture below of loco as delivered to Llangollen Railway yard.
Posted by llanblogger at 8:46 AM