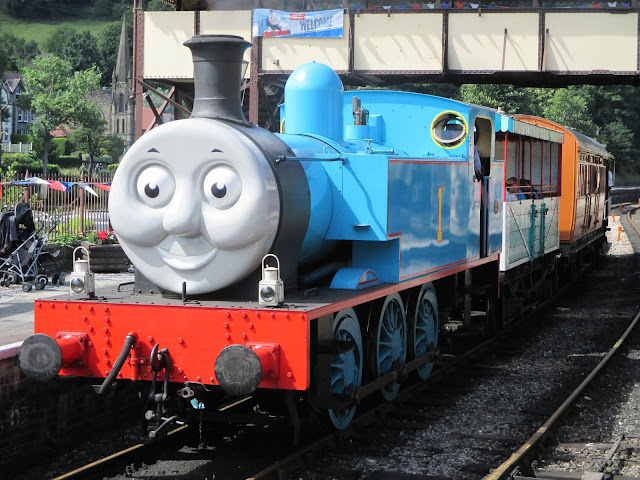 * Thomas the Tank Engine brought visitors flocking to Llangollen Railway.
A weekend of appearances by Thomas the Tank Engine brought visitors steaming into Llangollen Railway.
A spokesman for the heritage line said: "The event was well supported by families who attended from all areas within the railway's 50 mile radius catchment area and a few came from further afield.
"Visitors from abroad were also evident, mostly visiting family or friends from the locality.
"For some small children it will have been their first encounter with a steam train and, for others, any sort of train such is their limited experience of railways these days."
The spokesman added: "The good attendance was evidenced by the large queue at the station ramp prior to opening at 10am on both days, all helped by the good weather on Saturday in particular, and whilst Sunday started off fine the onset of rain in the afternoon ensured early departures for some after they had experienced all the event had to offer."
Thomas the Tank has had a busy year so far with appearances at other heritage railways in Britain. 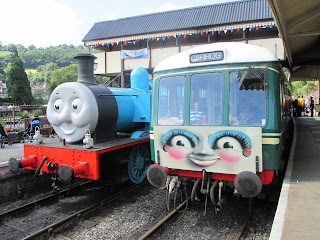 *  Thomas with Daisy the railcar.
He has also been abroad, visiting Denmark for an event at the Danish Railway Museum in Odense, and made two visits to the Netherlands when  a return visit was made to the Dutch Railway Museum at Utrecht and later to a heritage line at Apledoorn.
Further visits to Europe are in prospect for the autumn.
The Railway's George Jones said: "These visits to European destinations show the international appeal of the Thomas the Tank Engine character."
Posted by llanblogger at 7:15 AM