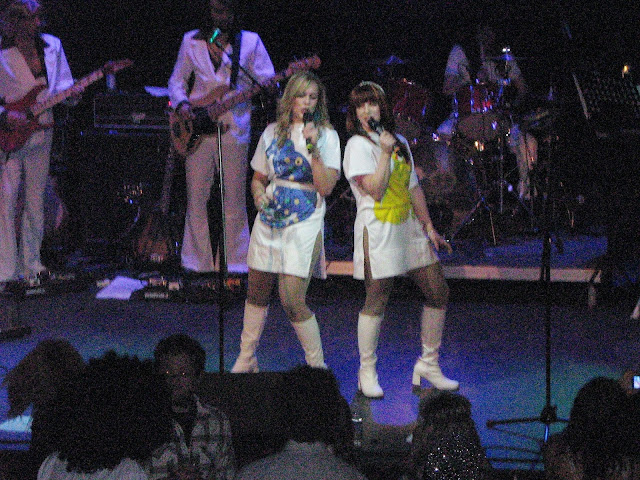 * Dani Chamberlain as Agnetha and Jo Potts as Anni-Frid in the Abba tribute.


The Seventies often come in for quite a bit of stick.
But if the fashions were a bit dodgy, there was certainly nothing wrong with some of the music that came from that decade.
Well, not if it’s presented in the way that it was at Llangollen Town Hall last night, because it literally had the joint rocking.
It was day two of the Women’s Festival of Music and Arts and on the evening’s entertainment bill were acts who provided a perfect evocation of the days when flares were all the rage and you could still smoke in the office.
Setting the Seventies agenda was Tracey Rawlinson as Debbie Harry.
Not only looking uncannily like the Blondie star, she also belted out some of her greatest numbers with competence aswell as confidence.
Another gob-smacking performance came from Justine Bradley as Tina Turner, whose talent was so big it spilled out from the Seventies into subsequent decades.
Although Barcelona, the barnstorming number he performed with opera singer Monstserrat Caballe was from the Eighties, Freddie Mercuy was definitely a creation of the Seventies.
And the powerful recreation of that song was a credit to Aaron Davies and Karen Davies who graced the Town hall stage later.
There was a brief and memorable departure to more modern times when the highly talented 11-year-old Maisy Paton belted out a couple of power ballads including Warwick Avenue, then it was back headlong  into the Seventies for a full-belt tribute to Swedish supergroup Abba from Dani Chamberlain as Agnetha and Jo Potts as Anni-Frid.
A highly polished six-piece band backed them and the famous songs, from Waterloo to Dancing Queen, came pouring out to get a couple of hundred people on their feet to shake the Town Hall foundations before the evening finished.
The three-day  festival, which began on Friday with acts as diverse as Llangollen Operatic’s Touring Troupe to a touch of burlesque from Lauren Kay as Lolly Liquer, continues throughout today when on the programme are everything from Aikido self-defence to an act called Cambrian Queens.
Proceeds from the festival will go to local mental health charities, MIND and AVOW.
Posted by llanblogger at 9:41 AM