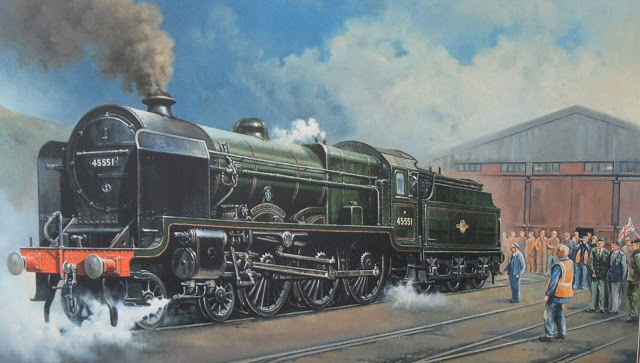 * An artist's impression of how The Unknown Warrior will look on its launch day on 2018.


VISITORS to Llangollen Railway are being invited to tuck into fish and chips to help top up the £1.5 million fund to build a new steam engine to mark the end of World War One.


Specialist engineers at the heritage railway are steaming ahead with the ambitious scheme to create an entirely new locomotive, to be called The Unknown Warrior, by November, 2018 – exactly a century after the guns fell silent on the Western Front at the end of the 1914-18 conflict.


The aim of the LMS Patriot Project is to commemorate all those who died in the “war to end wars”.


To keep the building project rolling ahead regular cash injections are needed, and the latest fundraiser will the running of a Fish n Chip Special train from Llangollen Station on Saturday, June 15.


Tickets are £15 each and include a return trip on the Dee Valley line, starting at 7.30pm, hauled by the steam engine Black 5, subject to availability.


The LMS-Patriot Project  was launched by heritage railway enthusiast David Bradshaw with the aim of building a new Patriot class loco, the originals of which ran in the 1920s and 30s.


This will tour heritage railways across the country and will also be capable of running on the mainline rail network.

Finance for the project is coming from public donations, legacies, commercial sponsorship and grant applications.

It has received the endorsement of the Royal British Legion, and the engine will carry a Legion crest above its nameplate.

Many original LMS drawings have been obtained for the project and, where necessary,  draughtsmen are preparing new plans using computer techniques which produce them in 3D.

Assembly of the The Unknown Warrior began in 2009 led by Dave Owen, chief mechanical engineer of Llangollen Railway Works.

Other workshops around the UK are making components for the new loco.

The massive chassis of The Unknown warrior have now been laid using heavy gauge steel plate and enormous castings at a cost of £48,000.

Next stages are to install the steam parallel boiler. Roughly the length of a single-decker bus and three times as heavy, this will cost £500,000.

Next will come the fitting of the loco’s six 6ft high wheels iron wheels, which have a total cost of £60,000.

The “tyres” which encase the wheels and the axles on which they will turn are both being sourced from specialists in South Africa.

While some of the components for the engine are new, others are being reclaimed from scrap or bought from private railway collections.

The booking form can also be downloaded from: www.lms-patriot.org.uk/FishnChip.pdf and the deadline for bookings is May 31.
Posted by llanblogger at 10:54 AM