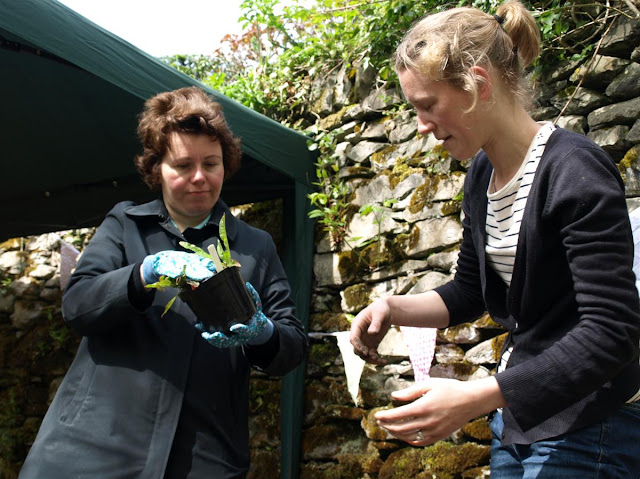 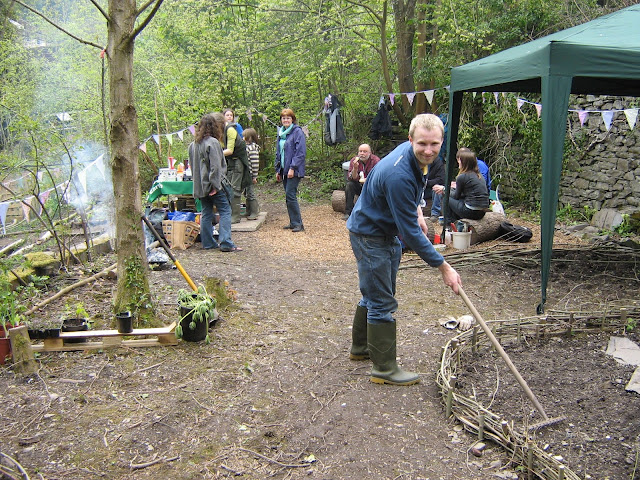 * Warren Davies cultivates one of the growing areas watched by fellow group members and an open day visitor.
A green-fingered bunch who have turned an overgrown plot into a thriving garden proudly showed off their handiwork to the public yesterday (Saturday).
A constant stream of people turned up to see the job done by members of Llangollen Community Garden on a site of around half an acre close to Plas Newydd.
Once the kitchen garden of a nearby grand house, the area has been leased by the group from Denbighshire County Council since late last summer.
Since then, the 25-strong organisation, which was originally set up with the help of Friends of the Earth, has spent months transforming the site from a wilderness of overgrown trees and weeds into a carefully cultivated garden.
The land is on two tiers, with the higher section being used to grow flowers and the lower part being turned over to vegetables.


According to Catherine Vesey, who has helped co-ordinate the project, the first crop of onions, potatoes, broad beans and peas should be ready for picking in a few weeks’ time.
She said that, throughout Saturday, more than 20 people had visited the garden open day, including Clwyd South MP Susan Elan Jones.
“She turned up in her wellies and stayed for a couple of hours to help us with some planting,” added Catherine.
“She also pledged her support for The Bee Cause, which we are promoting. This aims to persuade the UK Government to back measures to protect bees which are currently under threat.”
Garden sessions are held every weekend and on selected weekday evenings, with group members taking it turns to help with the work.
More details of the Community Garden can be found online at www.llangollengarden.co.uk, on Facebook at www.facebook.com/LlangollenCommunityGarden or by text/calling 07525 016503.
Posted by llanblogger at 8:54 AM