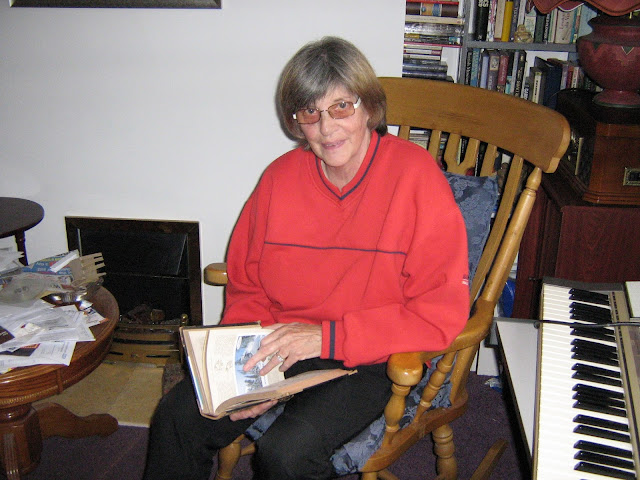 * Pam Williams-Hughes is seeking a posthumous pardon for a man she believes was wrongly hanged in 1883.

A LLANGOLLEN woman is trying to clear the name of a young Welshman hanged for  murder more than a century ago.


Pam Williams-Hughes was featured in the Leader last summer when at the age of 69 she gained a 2:1 BA Honours in History at Glyndwr University after battling against a brain tumour and lifelong dyslexia.
It was during her history studies that she came across the fascinating case of 24-year-old Abraham Thomas who was executed at Manchester’s Strangeways Prison in 1883 after being found guilty of murdering a fellow staff member in the house where he worked as a butler.
After a long study of the case Pam, whose speciality subject is Victorian crime, is convinced of his innocence and that he should be granted a posthumous pardon.
Abraham was born in Henllan, near Denbigh, in 1859 and, as a well-educated youngster, was apprenticed to a shoe shop in Denbigh before moving with his twin sister Martha to the Manchester area sometime between 1876 and 1880.
After working as a hotel waiter he secured the position of butler in a well-to-do household at Kearsley, near Bolton, in 1882.
There was disagreement amongst staff members which came to a tragic head between Christmas and New Year 1882/83 when housekeeper Christina Leigh died in the house as the result of being shot by 26 pellets from a rifle known as fowling piece on January 4, 1883.
Abraham was immediately alleged to have killed her despite there being no witnesses to the shooting and no-one heard the shot.
In just over a month the young man had been tried and found guilty of the murder and faced the hangman at Strangeways.
Pam said: “I was researching another matter when I came across details of this case and have been fascinated by it ever since.
“It was the subject of the dissertation I did for my history degree.
“There were grave doubts whether Abraham actually did pull the trigger so I firmly believe there was a miscarriage of justice.
“The evidence and his trial at Manchester Assizes appeared to be loaded against him and the more you unravel things the more questions you are left with.
“That is why I am now trying to get Abraham a posthumous pardon.”
She added: “In the next few weeks I will be contacting the Home Office to enquire about the process.
“I shall also be trying to organise a petition to support the call for a pardon.


“Some of Abraham’s supporters, including the vicar of Henllan at the time, called for him to be allowed an appeal before he was hanged but nothing came of it.
“I am also writing a book on the subject in which I am reconstructing the lives of the people involved together with the crime and its outcome.


“I would like to hear from anyone who knows anything about Abraham or has a picture of him.”
Pam, who is originally from Birmingham, moved to Llangollen about two years ago after spending her working life first in the Royal Air Force and then with local authorities.

She was diagnosed with a brain tumour before she started as a mature student on a fine art degree course at Glyndwr in 2007.

But a brain scan in September 2008 revealed the devastating news that the tumour on her pituitary gland had tripled in size in just three months.

Pam had to undergo a life-saving operation at a neurological hospital in Liverpool, which saw the tumour successfully removed.

Despite being given the welcome news the growth had not been malignant, her sight was affected.

This meant she was not able to continue with her fine art studies but she was to transfer to a history degree.


At her graduation ceremony last Pam was also presented with an award for being an outstanding student in humanities.
She will be giving a talk on the case at the Memorial Hall in Llangollen in September on a date yet to be arranged which will be open to interested members of the public at a small fee.
* Anyone with information about Abraham Thomas can email Pam at mailto:chimrea@yahoo.co.uk
Posted by llanblogger at 7:34 AM