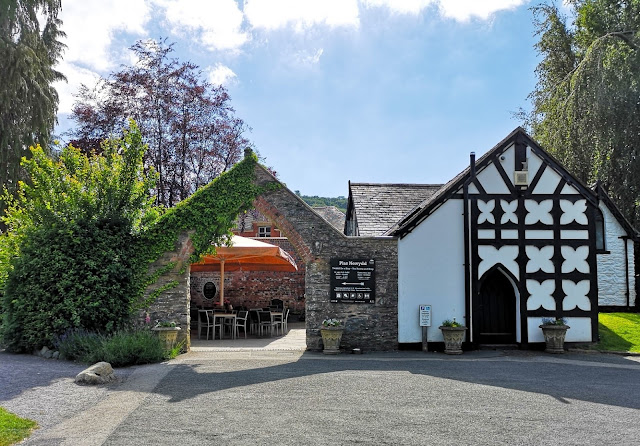 * The cafe at Plas Newydd.

A chef has been busy introducing Japan to the delights of Welsh cuisine in Llangollen.
Steve Thomas, who runs the tea rooms at Plas Newydd is being featured in a Japanese TV travel programme about Wales.

“It’s a long running show which over the years has filmed across the world,” explained Steve.

“With the Rugby World Cup being hosted by Japan this September they have been filming attractions in Wales and one of the things they wanted to include was our traditional food.”

The TV crew was interviewing people at the Llangollen International Eisteddfod when they were told a visit to see Steve at work in the Plas Newydd kitchens would be highly recommended.

“They phoned up to ask if they could come over here. We made them welcome and I presented two dishes. One was lamb cawl and the other was chicken with leeks in a tarragon sauce,” said Steve.

“The crew tried them both and were most enthusiastic, the meals went down well. So much so that afterwards they even bought scones and Welsh cakes to tuck into for the journey back.”

July has proved to be packed full of activities for Plas Newydd. One of the major events was acting as the host venue for the launch of a mobile phone app promoting the Welsh language and heritage to hikers and walkers. It works by highlighting the original place names and area’s history to the devices’ owners.

Plas Newydd was delighted to be one of the sites used by this year's Llangollen Fringe Festival to perform a laughter-filled production.

The museum’s picturesque grounds were also the backdrop for a special artistic day entitled The Big Draw – where budding artists could come together as a group and commit the beautiful landscape to paper.

With the summer holidays in mind a number of local venues, including Plas Newydd, have joined together to offer 10 Things To Do In The Dee Valley.

The project celebrates the 10th anniversary of the inscription of the Pontcysyllte Aqueduct and Canal as a World Heritage Site and is designed to give families plenty to do as they enjoy getting out and about.

Participants are able to take part in a fresh challenge at each host destination. At Plas Newydd they can tackle a meticulously-laid trail, using just a special map for clues as they track down a series of objects placed throughout the grounds.

And there’s been a great response to an environmentally friendly initiative at Plas Newydd. The site has started to grow its own plants in a specially built poly-tunnel using organic peat-free compost.

Some of the plants are to be used in the grounds to increase the flowering period with others being made available for sale to the public.

“There are been a great deal of interest in this, which is very pleasing,” said Plas Newydd gardener Neil Rowlands.
Posted by llanblogger at 7:54 AM